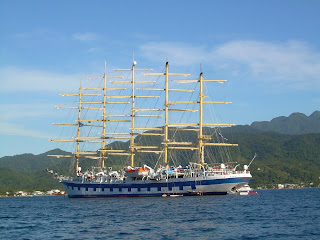 We spent spring break aboard Royal Clipper, pictured here without her sails (but shown in my previous post with all of her sails). It was a wonderful vacation, and I'll take a couple of posts to tell about it. We flew into Bridgetown, Barbados, on Saturday the 21st, and boarded Royal Clipper soon after. A welcome party was going on and we took some time to have a cold drink and some goodies, to explore the main decks a little, and then went to our cabin to unpack and have a nap. We settled in for a week of adventure and pampering!

We were under full sail power approximately 40 percent of the trip, and the engines were used to help us along. One night the winds were strong, and the sails were all taken down. We really were rocked to sleep that night! 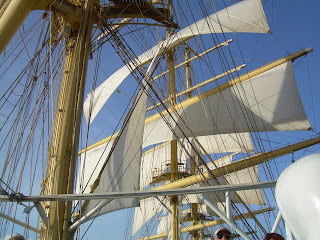 I could have taken a hundred pictures like this. I'm not really a sailor -- that's Joe's thing -- but being aboard a tall ship is different from being on a Day Sailer. The sails were huge and majestic; I think there were 30 or 40 of them. Joe would know for sure.

Royal Clipper holds 220 passengers, but on our week there were just 149 aboard. Each time we would sail out of a port, there was a magnificent ceremony of raising the sails, with beautiful music in the background. We never missed the sail away time -- sometimes it was late at night with stars and moon in the background and other times the sun was setting as we pulled out. Either way it was just gorgeous. 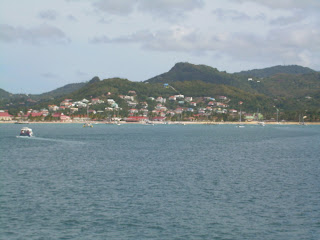 We visited a different island each day. All but Barbados were volcanic islands and hence they were mountainous. (Barbados is much more flat; it is a coral island.)

We visited St. Lucia, Dominica, St. Kitts, Guadeloupe, Antigua, and Martinique. They looked pretty much the same from aboard ship, although some of them had distinct personalities.

Most times we anchored off the shore and rode small tenders onto the beach, but in Barbados and Martinique we pulled up to the harbor and used the gangway. The daily departure time was announced several times -- the ship had a schedule to keep and no one wanted to leave a passenger or two behind. We never did. 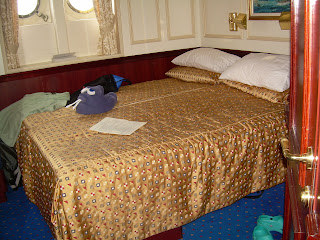 Our cabin was small but elegant with comfortable bed and a pair of portholes. I didn't get a photo of our marble bathroom, but it was much more pleasant that my bathroom at home (though a bit smaller!).

There were storage compartments everywhere in the cabin. Our stewardess visited twice each day to tend to the cabin and provide fresh towels as needed.

We were amused to find a different towel animal on the bed when we returned to the cabin each morning after breakfast. The first was a snake. 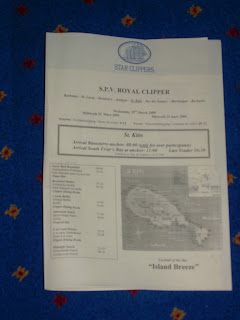 Unlike typical large cruise ships, there were no casinos and no major entertainment. Evenings on deck featured a fashion show from the sloop's shop, a karaoke night, a talent night, and other low-key entertainment.

During the day, there were tours of the engine room for those who were interested, mast climbing, snorkeling and other water sports. Each day there was a beach for people to visit, and one day lunch was served as a beach barbeque.

Most of the ports featured optional shore excursions, and we took advantage of several of them. Everything was outlined in a daily bulletin that arrived at our door around teatime.

We had a wonderful time.

*karendianne. said…
What a fascinating trip. ...and luxurious as well. I like the "low key" aspect and the way you describe the raising of the sails makes my heart skip a beat. It sounds so, well, romantic!
Tuesday, March 31, 2009 9:36:00 AM

LoieJ said…
That does sound nice. MIL took the adult family members on a fancy cruise. Not my DH's style, but your type of ship sounds better. But, are people on this type of ship more prone to sea sickness? If so, that would be me.
Tuesday, March 31, 2009 2:50:00 PM

Guenveur in Kent said…
Just what the doctor ordered, I'd say, if doctors ordered just what a person who's had such a winter as you. So glad for you. Your description of the sail raising says it all. Lovely!
WC word: rosma: the mother of Frazier's producer.
Tuesday, March 31, 2009 6:11:00 PM

Unknown said…
What a wonderful description. It sounds like fun. I have been on one of the big cruise ships and I think I could live without all that evening entertainment without any problem. And now you are back to reality..how sad. But Spring is here and soon the weather will break for you.
Tuesday, March 31, 2009 8:26:00 PM

Helen said…
Goodness, your vacation sounds incredible. I'm glad you had such a great time.

Tanya said…
YEAH!!! Have a wonderful vacation!!! Oh what a dream! My daughter was taken on a cruise a couple of years ago and I didn't understand what animal towels were until she sent me a picture. What a fun idea!
Friday, April 03, 2009 9:29:00 PM