All in a Day's Work 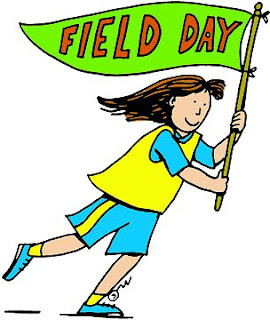 As we enter the home stretch (16 days and counting) until the accreditation team arrives, there is much to be done. Nerves are frayed, computers are behaving badly, rewrites abound, and yet those of us at the epicenter have managed to keep our sense of humor. Atop this stress today came another chaos -- the annual Field Day, where kids in blue shirts compete against kids in white shirts, and employees are very careful to wear neither color (I went with purple and aqua to be safe).

Near the end of the school day, my phone rang. It was the parent of an 11th grader who had been home sick today. She wondered if I could go to his locker, retrieve his history notebook and get it to her 6th grader to bring home. No one had answered when she'd called the division -- everyone was out watching the Tug of Conflict (only in a Quaker school). I took down the particulars including the location of his locker ("near the baaaaaaaathroom" he said in his most disdainful 11th grade tone) and headed down the hall, hoping to be done with the errand before Field Day ended and hundreds of hormones in sweaty stampeding bodies burst through the door.

I failed. I got the notebook okay, but had to wend my way back through the hordes of upper schoolers to get down to middle school before their dismissal (earlier than the upper school end of day). When I got there, the hall was swarming with the directionless bugs that middle schoolers often are; one of the teachers helped me to find the kid brother, who had red hair and a grin cute enough to make one rethink one's prejudice against middle schoolers.

As I started back, feeling good about "mission accomplished" I ran into -- literally -- a tall woman with a spaniel of some sort on the end of a leash, snuffling and wagging amidst the kids. I tried nicely to ask her not to bring the dog inside the school, and made reference to allergies and hygiene. She scooped the offending pup into her arms (it was almost as cute as the red head had been) and stormed off saying, "I need to find my daughter!"

When I got back to office, I began to tackle what was being billed as the last of the revisions, when my door opened. In came Mrs. Middle School, dogless, and began to take me to task for speaking to her "the way that I did." She said that her daughter had been in the school since kindergarten and no one had ever said anything about not bringing the dog into the school. I was surprised at that, because I remembered sending out an all-parent bulletin on the subject about six years ago, but I thought better of mentioning it. She wouldn't have been able to hear it or anything else; she was on that great of a rant. Furthermore, she was not the kind of person who "flaunts the rules." I waited until she calmed down and thanked her for coming in and saying that I was sorry that she was so upset by our encounter. Neither of us felt good at the end of her visit, but out she went.

Fully expecting this not to be the end of it (you have to remember that families pay a tremendous amount of money for tuition and some of them develop a strong sense of entitlement), I documented the incident, and finished the "last" of the revisions to the student records section. Then the phone rang, and although we don't have caller ID, we can tell when a call is coming from on campus or outside. It was the latter. I almost didn't answer it, so convinced was I that it was Mrs. Middle School calling with yet another round of ammunition.

"This is Alice R," said the voice on the other end. "I just wanted to call and thank you for getting that notebook and giving it to my son to bring home. You were so nice to do that!"

What a good way to end a crazy day.

PS: I never heard whether Blue or White won.

Anonymous said…
Oh Nancy, not only parents in private schools feel that sense of entitlement. I taught in a public high school and many a parent had the "I pay your salary" attitude. Glad your day ended on a happier note. Anyone who has worked in the education field knows what a gift it is to be thanked; it doesn't happen often enough. I thank you for all those who did not.
Sue
Thursday, October 08, 2009 8:37:00 PM

AnnieO said…
It does amaze me how much people who are crazy about their dog think other people are too! I wish someone would tell purse dog owners that they have to leave their dogs outside the grocery store--they all ignore the "guide dogs only" poster.

Anyway, glad the madness of the day ended with a congratulations for your efforts!
Thursday, October 08, 2009 9:46:00 PM

Unknown said…
I'm not surprised you never heard - schools of any size are a completely mad environment in which to work - we often say (with our tongues only partially in our cheeks) they'd be a great place to work if it wasn't for the parents and the kids!
Friday, October 09, 2009 3:06:00 AM

Pat said…
Nancy, you know that my daughter teaches elementarty school in a very large, neighboring, very affluent school district. She could terll you stories about entitled parents that would make your toes curl. As a matter of fact, she's often thought of writing her thesis on "teaching the over priviledged child". But for as many PIAs as there are, there are even more wonderful parents and kids who act as an antidote to the others. All it takes is one thoughtful parent to make a phone call or send an email to brighten your day.
Friday, October 09, 2009 6:17:00 AM

StitchinByTheLake said…
Oh the memories! As a high school principal I was constantly amazed by the parents who would tell me (after their kid got in trouble) "my child would never lie to me and he said he didn't do it." Parents listen up: children sometimes lie. Especially if they're in trouble. Oh well.... And don't get me started on dogs! I'm a dog lover...but there are places dogs don't belong and school is one of those. While we were on vacation in Estes Park, Colorado last week we were absolutely amazed at the number of people who had their dogs on leashes while they were shopping! It was so crowded that there was no way to avoid bumping into them - from the very tiniest to the very largest they were there sniffing at people passing by, lifting their legs on the lamposts and flowers. Now don't anyone get mad...I repeat, I LOVE dogs. But they aren't appropriate everywhere. blessings, marlene
Friday, October 09, 2009 8:25:00 AM

*karendianne. said…
Well this is one big day at the office! You know this is a really great post, too. I totally dig your writing. I've said that before and I'll say it again and again. You bring the reader in with you and your vocabulary is nothing short of Wordy.

Barb said…
I just finished four days as part of a NEASC visiting accreditation team! I have never worked so hard and such long hours for four days straight before in my life! As a high school teacher for over 30 years, and now a member of an evaluating team; I can see both sides of the fence! They are both countless hours of work! Good luch with your accreditation!
Friday, October 09, 2009 7:32:00 PM

Tanya said…
Hurray for you for being able to keep your temper when being attacked and having a trying day at the best.

It was nice of the first mother to call back. I often forget to say thankyou although I seem to free enough with complaints. Shame on me.
Friday, October 09, 2009 11:01:00 PM

altar ego said…
I admire your pluck with the 'rent on a rant. Grace under pressure to be sure. In fact, I enjoyed your entire post, sprinkled with equal parts tenacity and humor.

And though I will ask, you may not want to divulge--which Quaker school? My tradition of origin is Quake, and much of my leaning falls in line with same.

Juliann said…
Nancy - we are on this same journey at our school. We have the next 8 weeks to write up our reports and it seems an ominous task. Our visit is in January. So much of what you are writing about lately resounds loudly with me.
Monday, October 12, 2009 9:40:00 AM

graceamazes said…
Nancy, not to take sides with the officious woman, but a note sent out 6 years ago (when she probably didn't have a dog) might be hard to remember. I have a difficult time remembering notes that came home 6 days ago!

Perhaps if you/the office/headmaster send out a "welcome back to school" missive at the beginning of each year, a sentence could be included to the effect that pets are not allowed in the school buildings for reasons of hygiene and accommodations for those with allergies.

We parents of public school children get the "weapons, drugs, violence" canned letter probably twice a year, even though I'd think it would be much easier to remember to leave your weapons at home than to leave your dog.

suz said…
Wow - lots of comments about the dog! My son has been out of college for 5 years, so my contacts with schools is non-existent now, but I cannot for the life of me understand why anyone would think their dog was invited into a school. Just allergy problems alone would be enough to make one step back and think, but apparently "think" is the operative word. Good for you for keeping your cool. I can only imagine what you and your colleagues are going through. My son works for a hospital and they get federal reviews that keep the staff in a tailspin every year. By the time it's over, he's totally wiped out.
Wednesday, October 14, 2009 10:04:00 AM