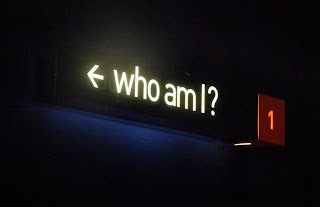 Back in the late Sixties and early Seventies, we heard a lot about a phenomenon called "An Identity Crisis." It was something one had (or perhaps aspired to have?). More often it was something referred to as in "She's having an . . . ." It mystified me. How could someone not know who she was?

About the same time we'd hear people talking about "finding myself." Again, "Amazing Grace" notwithstanding, I never was really lost (other than that time on Ashbourne Road when I thought I would never see my family again).

Presently I'm active in the Lutheran Church and employed at a Quaker School. In both of these realms, I'm sometimes asked to participate in "exercises" of introspection. We'll be asked things like which of these markers really matter to us about ourselves: Gender, Age, Sexuality, Race, Class. We'll reflect for a bit (sometimes an interminable period) and then we'll "share."

"As a gay man," someone will begin. And another will respond, "Well, as a Latina woman," and I sit there mute.

As a late-middle-aged straight white female, I never think about those things! I guess that if I spent enough of that introspection time pondering these markers instead of admiring the pattern on the rug or enjoying the designs the leaves are making as the breeze goes through them, I'd become aware that they impact me far more than I think.

But here's how I think of myself. And here are the markers that matter and shape me: Wife. Mother. Sister. Friend. Listener. Quilter. Lutheran/Quaker. And, praise God, Grandmother. 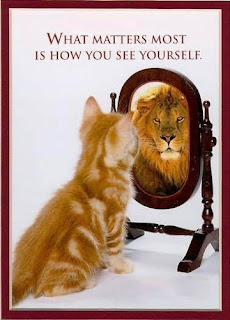 *karendianne. said…
Great thought provoking post as usual my friend! I started to whip out my markers but sheesh, that got me into some deeeep territory. Julian was enough for the morning!
Thursday, October 29, 2009 9:52:00 AM

Linda said…
I love the photo of the cat seeing himself as a lion. I guess I can relate to that. Sometimes I see myself as bigger and mightier than I really am. Life has a way of humbling me. Thanks for today's posting. It got me to thinkin'...
Thursday, October 29, 2009 11:41:00 AM

Pat said…
As I have aged, I have found that I am less and less concerned about what others think of me than with trying to live my life well and graciously. It has helped me separate the wheat from the chaff & focus more on what is important in life than what SEEMS important at the moment. It's very freeing. What's that poem? "When I am an old woman, I shall wear purple"?

Gari in AL said…
Introspection is highly overrated, if you are happy with who you are and your place in the world. A little internal check every once in a while, kind of like gasing up the car, and then off we go again.
Thursday, October 29, 2009 9:33:00 PM

Anonymous said…
I've been me for so long (68 years) that I don't think thoughts of "who I am." It's enough to wake up cheerful, accomplish a few chores, and then do fun things either alone, with my dog, or with friends! I enjoy today and don't worry about tomorrow.
Thursday, October 29, 2009 9:51:00 PM

StitchinByTheLake said…
What an interesting post Nancy - one I'll spend some time thinking about for sure. If I can figure myself out I think I'll post on it too! blessings, marlene
Friday, October 30, 2009 10:13:00 AM

Unknown said…
Here in the UK the government are obsessed with identifying everyone's ethnic origin on every form at every titch and turn - I've never been sure why this information is so crucial, there's probably a good reason but it's not obvious to me - I always tick the box 'does not want to disclose' as in my book is shouldn't matter what you are or where you come from, everyone should be equal and is in my eyes - mind you maybe I'm just taking the chance to buck the system too :o)
Sunday, November 01, 2009 4:14:00 AM

Karen L. said…
I had to laugh (and am actually still laughing) at your comment about "pondering the pattern on the rug and enjoying the designs the leaves make ...... "!!!!! That's me too! Maybe I am just not very "deep". Too much introspection is just that "too much". We get so caught up in trying to figure out "who we are" that we forget to "be" ... as in living in the present. Seems to me that all these reality shows where people treat others badly just to get ahead or win are tied up in this "who am I" notion. I don't watch them because I think they set very bad examples. Everyone wants to be on top or be a celebrity. Well, not everyone can or should be. It's nice to live a "regular" life too. And by the way, your William Morris quilt is just lovely!!!!! Making a quilt that beautiful would be enough for me .... if you know what I mean. (Sorry for all the quotation marks.)
Sunday, November 01, 2009 1:18:00 PM