Oh, I tell you, I've had the loveliest weekend! Home alone! My husband is not a demanding person; he is about as easy-going as an individual can be (has to be, I guess, to live with me). And yet having him gone and having no one else's needs (apart from Bo's minimal requirements) to think about, I was free to relax and go at my own pace and do what I wanted to do. I became aware that my usual pace is not my own pace; it is much faster than is comfortable, in response to all that I need to do or -- at least -- all that I perceive that I need to do. I multi-task so often that I'm frequently failing to just enjoy doing the thing for the sake of doing the thing, if you follow this garbly train of though (and I think you do). 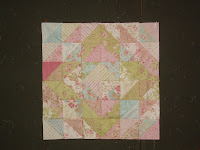 Friday evening I had a light dinner of left-overs and then went downstairs where I began the laundry marathon. Which was painless as I had the Phillies on in the background and Bernina in the foreground. Someone had given me a gift of a pack of Moda turn-overs and I put them together.

The gal who does my nails is expecting her second child in January and has learned that it is a girl. Linda takes very good care of me and I had thought I would make a quick little tied pinkish quilt for her new daughter. This turnover top, I think, fills the bill. I actually had a piece of one of the fabrics that I'd bought for a round robin (yes, Ms. Jan, yours!) and there was enough to cut and piece for the binding. So I just need to get backing, batting, and floss and I'm good to go!

I also did the addition for this month's round robin, but I'm not permitted to show you that. 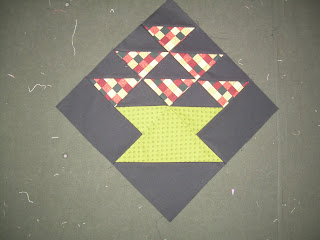 Emily No Blog's daughter Mandy is getting married in March. Em's a member of the monthly hand quilting group, the Uvulas (I've told you before: Don't ask!) and the group asked her to buy some fabric that Mandy would like and we'd make a couch quilt as a gift for her.

Em brought the check and the green to a meeting and we all agreed that we'd make two basket blocks each, using both fabrics and adding anything else that might be needed from stash. We'd use Kona black for the background. And then we'll divide up the tasks and purchases to get the blocks turned into a quilt. So I started those blocks on Friday night. 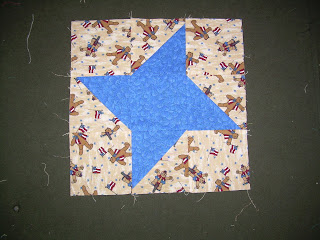 Saturday was a continuation of the laundry marathon (it is a wonder we weren't wandering around stark naked, there was so much of it!) and it also was a day of body work: hair cut, mani/pedi, and eyebrows. I shopped a little and made a casserole for tonight's dinner. I tried to buy new tires, but the store was closed by the time I got there. I had dinner with Bonnie at our favorite burger place.

And I made this friendship star block for Michelle, a member of our monthly block exchange. She's an Air Force wife and is making a couple of baby quilts to have on hand for Air Force moms who deliver babies after their husbands have been killed in combat. Such thoughtfulness! And how heart-wrenching. 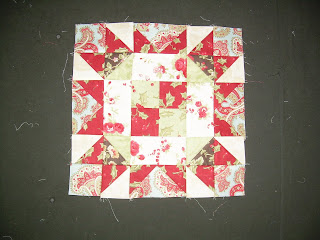 After dinner I put on a terrible TV movie on Lifetime, "Sorority Wars," and mercifully finished my sewing before the film was over. Yes, you are correct if you are thinking that this is the October block for the BOM from the Fat Quarter Shop! It's not my favorite block in the series, but it was a lot of fun to make.

I've noticed that the packets this year have an abundance of fabric. I'm thinking that when all twelve blocks are finished and set, there will likely be enough to make another dozen blocks from the left-over fabric.

This morning I got up for early church and then went out to breakfast with a couple of friends from church. Came home and finished the closet change-over, tidied the guest room, did some on-line shopping, and just as I was thinking it was time to put a sandwich together I heard Himself pull in and I was awfully glad to see him!

Juliann said…
Sounds like a lovely time and I know what you mean about being home alone. Hope it was a healing weekend.
Sunday, October 18, 2009 7:03:00 PM

Anonymous said…
Wow, I clicked on your link on another blog and found my "other self", parallel universe, or something like that. ;) The similarities are startling -- wife, mother, grandmother, sixtyish, near Philly, and Home Alone (and loving it) for the weekend! Unlike you, however, I have another night to myself, then tomorrow my also easy-going guy will be back. I've done some sewing as well this weekend, but it's for holiday surprises that I can't show yet. Really enjoyed and related to your post!
Sunday, October 18, 2009 7:25:00 PM

Unknown said…
I know just what you mean about driving your life at a speed faster than is comfortable - you sound like you really needed that time of peace and tranquility even if you had to use some of your energies sorting out the laundry - hopefully it will have given you the chance to recharge those batteries sufficiently to cope with the last push at work
Monday, October 19, 2009 4:35:00 AM

LoieJ said…
I am spoiled as I have a fair amount of time home alone during the weekdays, and I sure need it, but sometimes take it for granted. But after a vacation or long family weekend, ahhh, that time home alone is a relief, even if it is only to do laundry or email. But just on MY schedule. Recently, I had a good week away, with other people all week, and I was looking forward to Monday ALONE. But Monday was a holiday for my husband. Fortunately, he likes to be outside.

Guenveur in Kent said…
You can be just crazy about someone and still be happy not to hear things like, "Have you seen my keys?" or "When will dinner be readdy?"or anything that means you have to respond to someone else's needs.Glad you had s nice time, even though you did a lot of stuff. I guess quilting is one of your joys, so that's not work. Therfe is never enough time to do everything I want to do when I am by myself.
Monday, October 19, 2009 4:56:00 PM

AnnieO said…
My mom loves it when my dad takes road trips because she does all the shopping, cooking, and most of the cleaning up. Certainly ALL of the laundry and meal planning. My DH does EVERYTHING around the house, but having true alone time is good! Sometimes when I get home from work and there's no one here, I just breathe a big sigh of relief--but of course am always glad to see them when they come home! Congrats on all the fun sewing time you got. I think you are a very fast worker!
Monday, October 19, 2009 10:16:00 PM