Cheesehead for a Day 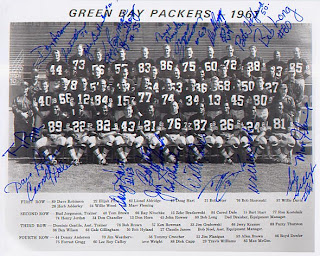 Yeah, I've got a favorite for today's Super Bowl game.  Not that I intend to watch it though (think of the hours of uninterrupted Bernina time!).  But rather because it brings back a real good memory.

It was nearly the end of the second week in January, 1967.  I was in love and thinking about a wedding and a wonderful future.  I was living with my mother, who had been widowed several years earlier.  Despite an oil-and-water chemistry, she and I got along as best we could.  We both knew it was time-limited.

Within months after my father's sudden passing, my mother -- a life-long homemaker -- had landed herself a job as the secretary in the maintenance office of the local hospital.  Despite being the only woman in the department, she was a valued member of the team; it was she who provided the interface, the explanations, the pacification, between the guys and the people making requests or complaints.  The fellows would do anything for her, and were often a godsend to us when something went wrong at home.  Sometimes I envisioned her as a kind of Snow White, with Tommy the Carpenter and Mike the Plumber, and Steve who did almost anything and drank quite a bit.  She was good to the guys and learned some things from them, too.  She began to understand and to follow baseball, for example.

There must have been endless chatter in the maintenance department that week.  And she apparently had missed the very beginning of the ongoing conversation.  Or perhaps, given the setting, it was the kind of situation where no introduction or explanation was involved.  I can picture her there listening, grasping for clues, trying to figure it all out, under no circumstances wanting to reveal her ignorance.

And then one evening, she apparently couldn't continue the pretend understanding any longer.  With a serious, earnest, and puzzled demeanor she came to me and said, ever so slowly and carefully,

kathyr said…
What a great story! I've been a cheesehead for a very long time, and we are most pleased to have you join our ranks, if only for a day. I started watching football with my dad, when I was about 4, and he would give me 1 inch of beer in a tiny juice glass.(we are in wisconsin afterall, so no judging). By 1967, when I first met my husband, he was most impressed that I didn't throw a ball like a girl. We will watch the game together and cheer on our beloved Packers.
Sunday, February 06, 2011 4:26:00 PM

Susan said…
Too funny, Nancy! These days, with ESPN, ESPN2 and so on, I don't think any of us could avoid knowing about pro football teams.

We're Steelers fans in this house because my husband was originally from western Pennsylvania. No sewing for my tonight as we are hosting a party.
Sunday, February 06, 2011 5:31:00 PM

Nancy said…
We are so NOT a sports family. I didn't come from a sports family and neither did my husband... We are so lost. We have no clue...but I did hear that the Packers are going to win. Apparently the internet has predicted the winner the past 4 years...not sure how...
Sunday, February 06, 2011 8:22:00 PM

Anonymous said…
At this writing, the Green Bay Packers are winning......

give it another 30 commercials and two hours and we will see if the continue to win.