A Quilt With No Name 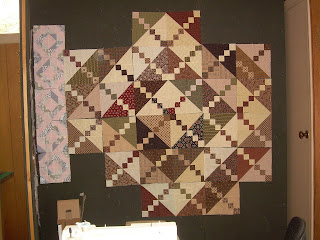 It seems as though the quarrel over which is the real project and which is the leader-ender has been resolved.  I'd initially tried a different layout for these blocks and then decided I liked the original design a little better.

I won't get back to this project until near the end of the coming week.  Today is full of the baby shower and Masterpiece Theatre this evening, and Monday and Tuesday nights are booked.  Just eight blocks to go . . . .

In the previous layout, I'd called this "Spare The Pyramids," in light of all of the unrest in Egypt.  But that seems to be over now, and the name no longer fits. What shall it be named?  There will be a little prize if someone comes up with just the right thing . . . .

Teresa said…
I really like your fabrics choices in this quilt and it kind of makes me want a hersey bar. Noticing that one block going the other way, I thought of the name "Sidetracked" and since instead of concentrating on the quilt, I got sidetracked to wanting some chocolate, I thought the name fit, lol. Its going to be beautiful.
Sunday, February 27, 2011 12:31:00 PM

Deb said…
Crossing Paths seems appropriate. It's beautiful, but then I love CW fabrics and the tan/chocolate look to any quilt. Have a good week.
Sunday, February 27, 2011 1:49:00 PM

Nicole said…
Hi Nancy! Can you tell me more about this quilt? Specifically, is the pattern available, or is it in a book? I really like it and think it would be a good use of my tub of Civil War fabrics.
Sunday, February 27, 2011 7:11:00 PM

Nancy said…
I have no name suggestion..I find naming my quilts a very personal thing...and my names usually come to me as I am making them..