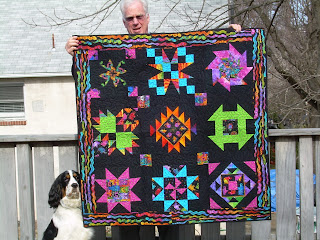 I may have mentioned that sometime this spring I'm going to become a great-GREAT aunt.  Which makes me think I must be about 108.  There's going to be a shower this coming Sunday and Sherry and I are going to go.  I'd made this baby quilt, shown earlier on this blog before it was quilted and bound, to take as my gift.

The invitation to the shower came in last week's mail. It was very cute.  And it said to bring a gift from the category indicated on the enclosed slip.  Which said something about "Bathe the baby -- bring shampoo, body wash, towel."  People who are 108 don't need to be told what to give as a gift.  I'm giving the quilt.  Maybe he can lie on it after his bath. 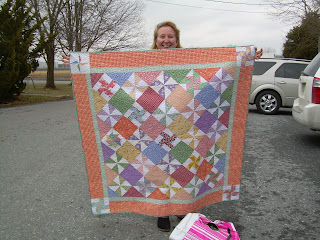 Monday was Presidents' Day which meant a day off from school.  I was sipping my tea and thinking about going off to look for a pair of shoes when the phone rang.  It was one of my favorite nieces, calling to see if I was up for meeting her at Sauder's and then going out to lunch.  I certainly was.  It's been years, literally, since I've had time alone with Susan.  Besides, I had another agenda item, more about which in a minute.

Met at Sauder's and picked up some more pink for Dying Of Cute and a bolt of 108" unbleached muslin and then wandered into the bulk foods section where I bought some trail mix for Joe and some caraway and dill seeds for the bread he has taken to making.  I also bought a couple of bags of Good 'N' Plenty type candy to take to the Upper School Director.  She's been provoking me and my will power by offering M&Ms in her candy jar and I need to put a stop to that.  I loathe licorice. 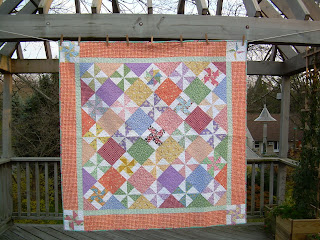 Anyway, Susan and I are on an internet quilting list together, and when I learned that her son and his wife were expecting, I wrote a secret message to the group and before long people had sent pinwheel blocks to Kathy who put them together and sent them off to Bonnie who quilted it and sent it back to me to bind.  I had planned to give it to Susan at the shower, but with an anticipated attendance of over 50, I thought much better of that plan and presented it to her in the parking lot at Sauder's (previous picture).  Too bad there aren't a couple of buggies to add to the ambiance.  This picture was taken right after it was finished and I think it shows it off a little more.

The intention is for this quilt to reside at Grandma Susan's house for when he comes to visit.

Anonymous said…
There he is again, my new love, looking handsome and proud. Bobbi

Pat said…
The neon Laurel Burch quilt is just spectacular, and will give that baby lots to look at. ALthough each block is wonderful, that cenhter block is the cat's meow.

The quilt for Susan's grandbaby is lovely as well, and what a great variety of pinwheels! Sounds like you had a great day, and have enough wide-backed muslin for at leaqst the next month or so.
Tuesday, February 22, 2011 9:10:00 AM

Lori said…
I'm sure the new mom will lvoe and treasure the quilt. it's gorgeous!

Judi said…
Sauders and lunch....sigh....still, that will be ME in a few short months!