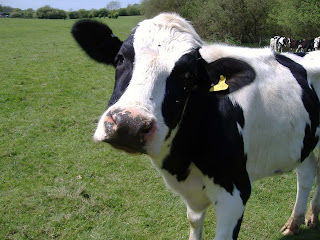 You may have thought she'd gone out to pasture.  The COW*, that is. Well, she's alive and well and her usual cranky self.

The DVD player has died. It is perhaps eight or ten years old and surely doesn't owe us anything. We use it to watch our Netflix. Which is pretty much all we watch since the rest of television is so abominable.

Polly had reported that Netflix was going to change to a new format, where the disks no longer go back and forth in the mail, but the movies are "streamed" directly from their site into our television. There is some new device needed for this, she said.

So the other night, after looking around for a 13-year-old boy who might give me the full scoop on this, I settled for a guy about ten years younger than I am, who said he'd been in electronics and sound systems for ever. He did some clicking and pondering on a miniature device with a screen that he just happened to have in his pocket and within a minute or two had the brand name and model number of what we need.

Off we went to Best Buy where we found something remarkably similar and decided to grab it. Wisely, I asked the 16-year-old behind the counter if this was all I needed.  It wasn't. There is a "LAN adapter" required to do the "streaming." And, no, they didn't have any.  "Actually," he saidt  "They are kind of hard to get right now." He checked his computer and reported, "They won't even let me order one for you." So we left the device at the store and snarled our way home.

Why -- in the name of everything bovine -- would a company manufacture a device that requires an additional part to be useful and then not include said additional part in the package with the device?  Holy Cow!

Trolling the internet showed me that Target has the device in their stores and on-line, and at least on-line has the "LAN adapter."  So I suppose that is the way to go.  Meanwhile, the two disks from Netflix sit tantalizing us from the mail table.

*karendianne. said…
I hear ya. I ran up against this. I ended up canceling my Netflix account and got a DVR. I like the Classic Movies on Turner anyway. Dadgumit.
Monday, February 28, 2011 7:04:00 AM

Anonymous said…
Netflix does have a fantastic selection of tv shows and movies that are available instantly, but it is NOT eliminating the DVDs. In fact, a lot of movies are only available on DVD. The instant shows are unlimited and you can watch through many different devices, as well as your computer. If you have an internet connection and a Wii (what I use), PS3 or XBox 360 you don't need any new equipment. (Well, let me clarify - you may still need the wireless router if you don't already have a wireless network set up, but I don't know why they would have had trouble getting it for you. They're everywhere.) There are also some BluRay players and HD TVs that have internet connections that will do it. Even the iPhone and iPad can do it! Failing all of that, you can watch on your computer (and you should be able to watch the DVDs on it, too).

Bottom line, Netflix instant shows are great and well worth getting something to help you use it, but you're still going to want a DVD player.
Monday, February 28, 2011 9:23:00 AM

Lori said…
FYI, You cannot watch any movie from netflix with streaming as you can by getting the DVD's.
With that said I agree with your COW! How annoying!
Monday, February 28, 2011 9:51:00 AM

Pat said…
And now Amazon is making a run at the NetFlix audience by offering free streaming content to their Amazon Prime members. Very similar to NetFlix, but without the mail service DVDs. I'll be very interested to find out how this streaming device works for you because I definately want to take advantage of the Amazon thing. We've had Amazon Prime for a while because it saves so much on shipping, and now this service makes it even more worthwhile.
Monday, February 28, 2011 11:08:00 AM

Salem Stitcher said…
I'm mooing right there with you. Sometimes technology is just not worth the trouble.
Monday, February 28, 2011 11:35:00 AM

Waytogojb said…
I don't think you're being cranky at all. You are just pointing out the general trend of some companies to make our lives a little more difficult while they make a buck. Reminds me of all the short changed "five pound" bags of sugar and other smaller goodies.
I love seeing your quilts!
Tuesday, March 01, 2011 10:20:00 AM

Anonymous said…
They do sell the DVR with the right guts at Best Buy but they are about $100 more than the ones that need the separate do-hickey. Since those gizmos are in short supply, I bought the loaded DVR. The whole thing is absurd though, as you point out.

The streaming Netflix is great but since not everything is yet available streaming (although that is how their business plan is moving them) you will probably want to keep the minimal disc in the mail plan. I downgraded to one at a time just so I can get the less popular titles that are not yet streaming.