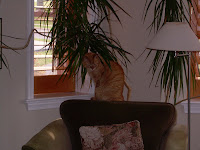 Here's Bo again, a couple of weeks after he went AWOL.

He's never told us where he was for those five days and nights, but he's come home a happier cat than he used to be, much more affectionate and engaging.

This afternoon he was perched on my chair under the dracena and I thought he looked kind of cute there, so I took his picture. 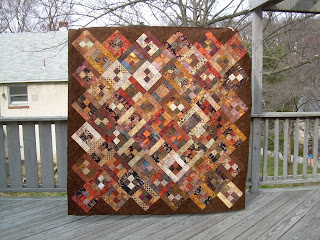 I'd picked up Cinnamon Latte from the machine quilter early last week and immediately machined the binding on.  It was a busy kind of a week, so I just got the handwork part of the binding begun and then it was time to go away.

I took the project along with me to Alexandria and hand-stitched that binding down as we visited.  We were having such a good time that the binding was done almost before I knew it. 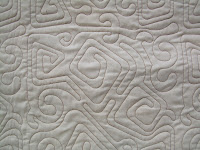 This photo of the back of the quilt shows the design we chose for the quilting.  I like it a lot and think it is splendidly compatible with the fabrics in the quilt.  I like the brown thread, too.

I'd bought all of these fabrics except the setting triangles from Wanda a couple of years ago when she was on a major cutting spree and had some extra strips. 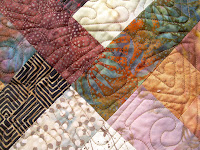 This is a close-up of the quilting on the front.

Nancy said…
Do you think now that Bo knows what it is like out in the cold cruel world he is more content?

Pat said…
The LAQ (Long Arm QUilter) really knows her stuff in coordinating thread color and quilting design; excellent choices on both. I just love the colors of this quilt.

Helen said…
I'm so glad your Bo baby came back home and is a happier boy now that he's back! Sometimes getting a taste of the "outside world" is all that's needed to appreciate love and affection you get at home!

Your Cinnamon Latte is beautiful. Love the colors and the quilting is really nice...it all goes together well.
Monday, April 04, 2011 7:48:00 PM

Lynda Halliger Otvos (Lynda M O) said…
Gorgeous Nancy, I love the colors you have used here. Quilting enhances that hue-fest. What have you planned for this beauty, if I may be so bold as to ask?
Monday, April 04, 2011 9:26:00 PM

Lorraine said…
I think Bo went to a cat retreat and had a good long look at himself....and has come back with a new attitude? Love the finish...and the brown thread for the quilting (and the quilting of course) works well...I love putting the final stitches into the binding ......a finish is always a great feeling!
Monday, April 04, 2011 10:45:00 PM

Mrs. Goodneedle said…
That quilt is the perfect combination of color, pattern, design and quilting! Well done, I love the name too!!
Tuesday, April 05, 2011 5:37:00 AM

Gretchen said…
I'm so happy that Bo is back after his walkabout. Love your quilt, especially the quilting. It is such an unusual design and very different than I've seen before. The name is perfect and for some reason I am craving a coffee beverage right now...
Wednesday, April 06, 2011 6:43:00 PM

Quiltdivajulie said…
Did you create this beauty from a specific pattern? I love the design!

The overall impact is fabulous in the photo - can only imagine it in real life.

Tanya said…
I've just spent the 20 minutes reading your last 21 posts. That's how amiss I have been. So nice to see your grandchildren. So glad to know that Bo is home (I would have been checking hourly if I'd known he'd disappeared!) Love your Cinnamon Latte and Sisters quilts. And your right, your friend's beautiful orange quilt is striking! Thank you for visiting and praying for us.
Monday, April 11, 2011 6:34:00 AM