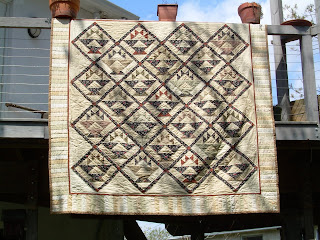 I'd wanted to make a basket quilt for a long time.  I had saved the cover of an old McCall's quilting magazine -- it featured a yellow basket quilt.  I thought someday I might make it.  Meanwhile, I fell in love with a certain black-background print that I discovered in Old Country Store.  I'd bought an unspecified amount and also picked out some coordinates.

My on-line quilting group, Fat Quarters, was doing a little project then where during our birthday month, we would send out some fabric to everyone participant with some instructions, vague or specific, of what was to be done.  I found this basket block, cut some of the black and some of the coordinates and picked out a background and cut some of that and asked for these blocks.  Turned out that I'd not sent quite enough background fabric to some of the participants, and they offered to fill in from similar stash.  I delighted in that idea.  When the blocks came back, I needed to make some more, and deliberately used some similars in parts of some of the blocks.  This was my first basket quilt to be assembled, my first piano key border. 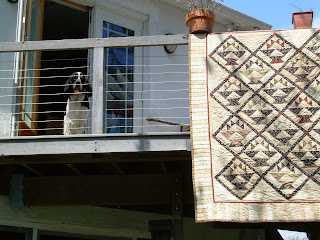 I decided that hand-quilting was the way to go for this special quilt, and asked my then machine quilter to machine baste it for me.  I started the hand quilting about three years ago,  picking it up when there was nothing else going on in the handwork department.  When I was nearly half-way finished the quilting, I discovered that there was a large "bubble" in the backing.  The machinist hadn't gotten the fabric smooth before she began to baste.  I didn't have it in me to rip out all of my quilting and start over.  So I proceeded on, knowing all the while that my very beloved quilt would have a major deficiency when finished.

I finished it last night.  I love the quilt.  And someday I'll get a better photograph so you can see the pretty colors (although that may happen if you click on the photo now) and see some of the blocks where make-do fabric was substituted.

But for now, it is finished.  And, despite it's problematic back side, I love it.  Blackberry does too.

Guenveur in Kent said…
It is so beautiful. But is this not the blue and caramel quilt? It doesn't look black. And I know you were working on the caramel and blue basket one. But whatever, this is a beauty for you to keep forever and hand donw some day far in the future.
Sunday, April 24, 2011 4:18:00 PM

altar ego said…
Absolutely beautiful. And I love how you've used the flower pots for their role in displaying this work of art!
Monday, April 25, 2011 12:05:00 PM

Quiltdivajulie said…
Can't help but wonder how many of our grandmother's quilts have ripples in teh backing . . . I checked the one hanging in my studio and sure enough, there's a wrinkle.

Anonymous said…
Just another reason to be happy that yo found new quilter!

Judi said…
Interesting that you should write about the wrinkle in the back of this gorgeous quilt.

Some time ago, I went to an outragously small exhibition of antqiue quilts from the collection of the Quilters Guild of the British Isles. In amongst the perfect quilts were some that.....you might say were not perfect, but I prefer to say had character, becasue that's exactly how they came across.

I was absolutely thrilled when I came across a quilt where I could picture the person making it....where she ran out of the red and substituted something else....and she was a tiny bit short of another fabric, so pieced it together to make it big enough.

The quilt was alive and had a history, it was there for all to see.

Tanya said…
It is such a beautiful quilt. The quiet colors are so calming. And I really like the piano key border that you did in mute colors too. I've always thought piano key borders should be bright and flashy but you have shown me I'm wrong.
Friday, April 29, 2011 1:53:00 AM