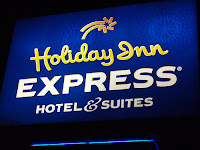 A year ago, I wrote on this blog about my delight in being a member of the Holiday Inn Priority Club.  Not so this time.  Far from it, she snarled.  Or mooed.

Yesterday I had occasion to contact the Priority Club to make reservations for our upcoming visit to North Carolina.  Last year when we stayed at one particular property, the points value for that property was 10,000 points.  This year it has more than doubled -- to stay there would cost 25,000 points.  For the same property as one year ago.  I had enough points to cover the two nights I wanted to spend there, but thought I might save the 50,000 points and use them sometime in the future at a property that was still 10,000 points.  We could have a nice extra vacation at some point by doing that.

Thinking it over last night, it occurred to me that the company may well be in the process of converting all of their properties to the higher price, and I might as well go ahead and use my points to cover the two nights; so today I phoned to make the change.

And they refused.  Absolutely not; no discussion, as Joanna and Ryan's mom used to say.

Because I had booked the accommodations at the Advance Purchase rate (which, incidentally, they didn't offer me until I told them I had seen this rate on the internet), they wouldn't make the conversion.  I had understood yesterday that by going with the Advance Purchase rate, the reservations could not be canceled. But the English-as-a-second-or-third-language clerk didn't tell me that I could not modify the reservation if I wanted to.

Over the years, we've spent a little more to use the Holiday Inns because of the predictability of the quality, partially, and also because of the "points" option.  It's worked well.  But apparently that is changing.  The points cost is going up, the policies are inflexible, and full information isn't given.  Not at all certain this is something we'll want to continue.

I explained my displeasure to the clerk, to her supervisor, and to the manager over that person, after being put on hold for more than fifteen minutes.  But they were rigid.

Wouldn't you think that they would want to be helpful to a loyal customer and do whatever they could to maintain that loyalty?

Oh, and for the record, they never acknowledged the nice things I wrote about Holiday Inn last year, either.  Even though I sent the post to them.

Lori said…
Moooo! My gosh, wouldn't you think businesses would be going out of their way to keep good customers or get new ones?! That's what we have to do at our business or we'd never make it in this economy.
Tuesday, April 26, 2011 12:31:00 PM

I'm glad to see your post. I was thinking of using Holiday Inn for my next road trip and accumulate some points. If they are this inflexible, I think I'll stick with Marriott.

Quiltdivajulie said…
Sadly, we gave up on Holiday Inn a year or so ago (even though they began in the town where we live). Hampton (part of the Hilton Honors group) is our chain of preference now.

The only control we have for bad customer service is to shop elsewhere. I get so tired of moving around ... I'd really rather be a loyal customer.

We belong to the Starwood Preferred Guest(spg.com)Program who has a smorgasboard of hotels across a wide price range. These include Westin, Sheraton, Four Points by Sheraton, W, aLoft, the Luxury Collection, LeMeridien, Element by Westin, and St. Regis.

We acquire points in 2 modes- airline miles and hotel points. RARELY do we ever pay out of pocket for either of these things. We earn points for literally every purchase & dine-out we enjoy. (My sister & I had to recently fly home for a funeral; her tix was $950 - mine was $100 using points.)

Make your money work for you! Find another group to earn the benefit of your business. You work so hard for you money, and "times" just aren't the best right now!
Tuesday, April 26, 2011 10:43:00 PM

altar ego said…
Yesterday I heard an interview on NPR with the guy who owns The Wine Library, an online wine site (duh). He was talking about the use of social media for businesses, and focused on customer service not to the squeaky wheels, but to loyal customers. His point totally underscores your frustration with Holiday Inn. In short he says: reward the loyal customer. The good word that goes forth from that does far more good than efforts to compensate the dissatisfied (not that you don't serve the dissatisfied, but don't overdo). Sorry you had this sour experience.
Tuesday, April 26, 2011 10:45:00 PM

Deb said…
We also use priority club with Holiday Inn, so guess we better beware! It's a shame that businesses don't focus on customer service like they used to..and in these times that should be a priority. I've found the same issue with local quilt stores versus on-line quilt stores. My local store doesn't follow through with what they say they'll do, by notifying me when they receive the item I'm waiting on, or informing me of classes dates/times, and then they wonder why people have moved to on-line purchases who strive for quick mailing and fast delivery of the correct item.
Wednesday, April 27, 2011 7:13:00 AM

Salem Stitcher said…
I'm getting ready to use the last of my Priority Club points for my husband's business trip...then I'm done with them too. I've switched to Hilton Honors. Not sure if they are any better but I've grown to like Hampton Inn better than Holiday Inn Express. Bottom line, with all the choices out there, they are stupid to not take care of their loyal customers.
Wednesday, April 27, 2011 7:57:00 AM

Lynda Halliger Otvos (Lynda M O) said…
Yes, indeed, Verizon lost our business after seven years of over $200/month for a family plan with three phones. We switched to Credo for less than $100. Each time I call Credo, a human responds very quickly and so far efficiently.