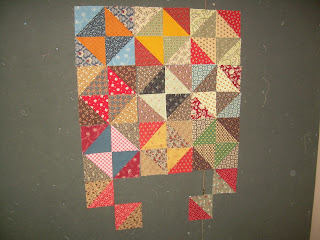 On Day Four of The Crud these things occurred:

. . . Whatever was clogging my Facebook Scrabble game cleared up and play resumed
. . . I took a one-and-one-half-hour nap
. . . I decided to tidy up the cutting table
. . . I coughed and snarfed less than on Day Three
. . . I re-found these blocks, pressed them open, trimmed the ears, and wondered whatever I had had in mind when I made them
. . . Thought Kathie might have some idea or another
. . . And pretty much decided to make four more pair and turn them into a little hospice baby quilt

Unless, of course, someone can refresh my memory as to the original plan!

Mrs. Goodneedle said…
Purdy little thing on your wall... glad you're coming around and recovering, albeit slowly.
Saturday, October 22, 2011 6:20:00 PM

antique quilter said…
oh what fun :)
I think they are looking good just the way you have them laid out! maybe a fun 2 fabric border same on top and bottom, that poison green and then another fabric for the sides, a red?
I know you will come up with something wonderful!
Kathie
Sunday, October 23, 2011 4:14:00 AM

Salem Stitcher said…
Whatever you were going to do with them, they are pretty little blocks!

howdidIgethere said…
It's an ill wind (or crud) that blows no good. Silver lining (I guess): you sure are productive when you're sick! Nice assortment of HSTs will make a lovely little hospice quilt! Glad you are moving in the direction of less coughing and snarfing.
Monday, October 24, 2011 12:35:00 PM

Guenveur in Kent said…
Glad to hear about the chicken soup from your neighbor. Lots of garlic helps, too. If nothing else, it keeps people away from giving you more germs, or vice versa.
Tuesday, October 25, 2011 9:47:00 PM