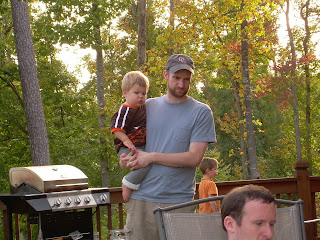 For years, Joe and I had a practice of going away over Columbus Day weekend.  Most of the time we went to Cape May.  When the kids were grown and married, that weekend became a time for everyone to gather.  Sometimes in Cape May.

This year they all decided they wanted a destination closer to the Virginia contingents, and Amy and Andrew took the responsibility for finding a place.  They did well.

The first night Andrew was the grillmaster, with Eli as apprentice.  He looks pretty serious here, but has a winsome grin, and is not at all shy.  He couldn't get enough of climbing stairs and looking down from the balcony into the living room. 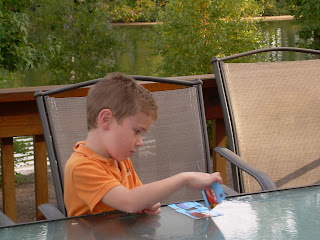 The house that they found to rent was immense and luxurious with five bedrooms, two family rooms, a home theatre, and all of the other rooms you would expect.  It is located on Lake Anna in Virginia.

We spent a great deal of time on the huge deck, eating our dinners, watching the lake, chatting, and playing Go Fish.

Sam, in kindergarten now, is beginning to sound out letters and words, and can even read a little bit.  He was a helper when I played Scrabble on my computer. 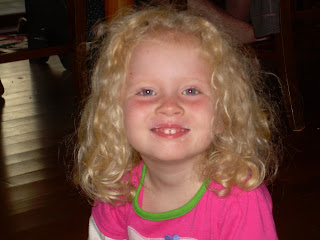 Caroline is plagued with carsickness, and had a rough trip.  I spent some time coloring with her and helping her to strategize during a cut-throat game of Go Fish.

She's a quiet little person, in contrast to her more loquacious brother, but has a vivid imagination, and likes to tell stories.

One evening it was her turn to say grace before dinner.  Her little voice was so soft that most of use couldn't hear her.  But that was okay because God could. 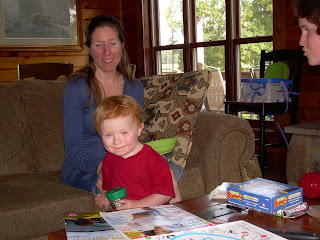 Tom and Anastasia had the shortest travel time, as Lake Anna is not far at all from Richmond.  Nate, a month Eli's senior, is a very busy person who loves to push things around (he was a superb help with the vacuuming at the end of our stay), and to get the pots and pans out.  He's such a busy person that it was hard to get a good photograph; he's not too busy, though, to settle in with a good book if invited.

The twelve of us had a marvelous time for three days and nights, and look forward to doing it again next year.  It will be even more wonderful, because Tom announced that there will be thirteen instead of twelve!

Salem Stitcher said…
What a wonderful weekend! Those sweet little faces... and one more to join you next year! Wonderful indeed!!
Tuesday, October 11, 2011 10:39:00 AM

Char said…
Sounds like a wonderful time. My daughter used to get car sick when she was a little one. We discovered if she didn't have milk before the car ride she was fine.
Congratulations on the new little. Guess you're thinking of a new quilt right now.
Tuesday, October 11, 2011 11:25:00 AM

LizA. said…
How fun! What a good looming crew you have there. Sounds like you had great fun. Congratulations on the news about the new addition.
Tuesday, October 11, 2011 11:26:00 AM

Guenveur in Kent said…
I've said it before and I'll say it again. Caroline is scrumptious! Of course, they are all adorable, but she is scrunpotious. She looks like a fairy child.
Tuesday, October 11, 2011 5:39:00 PM

Anonymous said…
I love the photos. I can't believe how they are all growing. It sounds like a marvelous family time in a great place.
Tuesday, October 11, 2011 8:41:00 PM