Sewing and Snowing, Near Philadelphia and Lancaster County 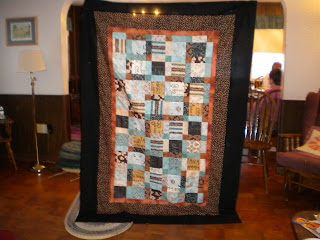 The weekend just ending was our semi-annual White Oak Getaway.  My Crud was not totally gone (nor is it yet) but I was not to be deterred.  Honna and I drove out Friday after work, leaving too late to do any shopping on the way.  We arrived shortly after the wine and cheese had been set out, and promptly settled in.

Two of our regulars were unable to go this time, but we had two terrific ringers, including none other than Suzan, who endeared herself immediately by presenting each of us with a tiny trick or treat bag that she had made and loaded with treats.

There was the usual variety of projects, but I forgot my camera so am relying on the kindness of colleagues to illustrate the weekend.  Judy took this picture of Helen holding up her coffee quilt. 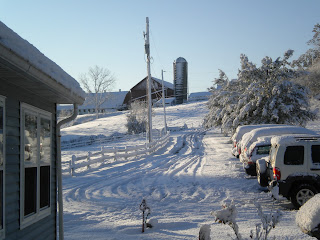 Saturday morning we woke up to falling flakes.  Certain that the 1-3" forecast would hold and perhaps be an exaggeration, Honna and I set forth after breakfast to shop in Intercourse.  She went to Zooks and I to the Old Country Store.  I noticed that they've done some rearranging and have a lot more kits than they used to have, including some very small CW looking projects that I resisted, even though they were enticing.  I bought a few things that I needed.

On the way back, we stopped at the Bird-In-Hand shop and although they did have the D-rings that I needed and could not get at OCS, I don't believe we will return.  The trip back to White Oak was interrupted by a car accident on a snowy uphill hogback road; we had to turn around and go back down, with no idea how to get back to the inn.  The two cars ahead of us turned left and Honna concluded that they must have a GPS (which I've never felt the need for since I don't go to unfamiliar territory often), so we followed them for a while, but when they turned right, we decided to turn left and after a bit of very rough road, I realized that I knew where we were -- it was on the route I'd taken for my early morning walk the last time I was at White Oak!  We got back just in time for lunch and Carol's delicious soup never tasted so good. 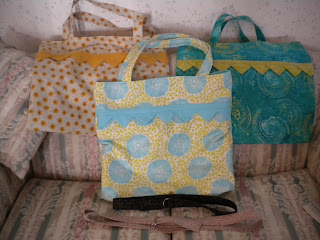 Honna wanted a bag-making lesson on Saturday night and Helen wanted a refresher.  I needed to make a bag myself for a gift, so we began prairie pointing and handle-making.  I'd bought some Pellon 987F fusible fleece at OCS since they didn't have the stabilizer I normally use, and I was delighted with the result.  My bag is in the middle (I made another, too, but didn't get a photo of it) and Helen's is the teal and chartreuse batik.  Honna's is the sweet sunflower print and I was very impressed with what a fine job she did on her first attempt.

All too soon it was Sunday morning.  To our amazement, the newbies offered to go out and brush the considerable snow off of everyone's cars!  What a lovely thing for them to do.  Someone said that they must really have wanted to be invited back.  And that had been settled hours earlier -- they were wonderful additions to a terrific group.  Already counting the days until we return!

Susan said…
So glad you're feeling somewhat better and came through the storm with a completed project.

Pat said…
So glad all of you had a wonderful time! The bags are splendiferous, as is Helen's quilt. Missed the soup, the OCS, the reindeer in the snow, but most all, I missed my friends. The engagement party was a huge success, except for the accidental call to 911 (don't ask), and some power outages.
Sunday, October 30, 2011 10:01:00 PM

quiltmom anna said…
It is always wonderful to spend time quilting with friends - never mind that you got to have time poking around in a quilt store. As for the snow well, with a little luck we will not have any for a while longer here in Alberta. We are always happy if we get past Halloween before the first snow...
Sunday, October 30, 2011 11:18:00 PM

howdidIgethere said…
Missed it all -- the quilters, the host and hostess, the shopping, the fun. But got the snow in Allentown! Family Weekend was more of an adventure than most planned between the snow, the downed trees and the power outages. Looking forward to April!
Monday, October 31, 2011 10:06:00 AM