A Couple of Things 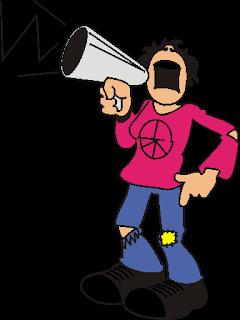 I need to get a couple of things off my chest. Not that I expect any relief from having done so.

Here's the first one: Yesterday I "unfriended" someone on Facebook because all (as opposed to "virtually all") of her posts have become political messages. I know she has many more dimensions than her political position (which happens to be similar to mine, as a matter of fact), and frankly I was tired of reading about just this one thing, not only one time each day but multiple times.

How many times do we need to shout out our political position? Is there really some expectation that doing so will convince someone in the other camp to defect? Someone who is so engrossed in proclaiming his own position that he can't possibly pay attention to ours?

Political propaganda is everywhere. It is interrupting the Olympics, it pops up on my Scrabble games for crying out loud, and the ads are all over the internet. Not to mention the telephone. Do we really have to have it as hourly daily messages from our "friends"?

Okay, enough on that.

Now here's the other thing. I've thought about this one for quite a while and am still not sure I can articulate it properly. It is what I've come to call "The 'C' Card."

You know what I mean, the statements (both verbal and written) that begin, "Well, as a Christian . . . "  Starting off a statement this way does two bad things. First, it pretty much tries to shut up anything anyone else has to say because how would that person respond? "Well, as an agnostic . . . ?" or "Well, as a Christian myself  . . . . ?" It really is designed as a conversation stopper. And the other bad thing is that it claims the absolute authority of God. Which is huge. There are many schools of theology within the Christian faith, some of which are contradictory to each other. How outrageously presumptive would a person have to be to know without a shadow of a doubt God's precise position on every single issue?

God must be sitting there, shaking her head, realizing yet again how even more incurvatus in se we have become.

Three Birds Inspired said…
Funny thing - yesterday I "un-friended" someone because she spent the entire day driving from one Chick Fil A to another taking photos of folks in lines just to prove that she (and they) are better "Christians" than the rest of us. It is only a matter of time until my head explodes so I am limiting all television viewing, blocking political crap on FB and generally pulling the covers over my head until the election is over.
Thursday, August 02, 2012 10:07:00 AM

Kat said…
Good for you Ms NP!
BTW if there is ANYONE out there that thinks they are not getting enough political advertisement, try living in OH, a "battleground" state. They are relentless about the mudslinging. I think once you make up your mind.. and it is a no brainer... you should be able to unsubscribe from further harrassment!
Thursday, August 02, 2012 7:24:00 PM

Anonymous said…
Well said, as a Canadian who watches US Broadcasting I really get tired of the mudslinging..actually our politicians are no better. I really wish they and their supporters would use their energy to actually make a positive difference.

and wouldn't it be wonderful if all of Gods Children could actually just Love One Another..just a thought

suz said…
I too unfriended someone because of politics. As you say, she has so many other wonderful qualities, but that seems to dominate her world right now. Another friend mentioned she would only vote for someone who believed in Jesus Christ. I wanted to ask if she wouldn't vote for a non-Christian, but it wasn't the time or place for that discussion, so I bit my tongue and changed the subject. This weekend I get to visit with my sister and her family who are all extremely left-winged and will do more tongue biting...I can feel a migraine coming on now!
Monday, August 06, 2012 1:43:00 PM