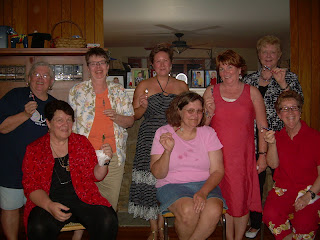 The first night that Joe was away, Blackberry and I had a party. Not to celebrate his absence, but rather to celebrate friendships. The time between White Oak getaways is always too long, and besides the getaway itself to White Oak, we miss each others' company. Helen somehow had the idea that a dinner together would be a good thing; rather than going to a restaurant, I offered my home.

Everyone brought something to share; Pat's and Honna's hors d'oeuvres were spectacular. Helen's husband's German potato salad was wonderful, as was Honna's [still slightly warm] beer bread. I forgot that Marsha was bringing cauliflower, and while I was making the chicken, I got the idea of doing cauliflower, so we had a kind of deuling cauliflower situation (buh buh BAH buh BAH buh BAH buh BUHHHH) with no one being able to decide which she preferred. Turbo and Bobbi contributed wine, Judy a delightful green salad, and Kathy provided not one but two desserts and oh my were they good.

We'd received a parcel from some-of-our-friend Sharon out in the Midwest that I'd been told not to open before the dinner. We opened it after dessert and found that Sharon had made for each of us a sewing stiletto, all different, and all beautiful. Here are nine of the ten of us (I'm taking the picture) showing stilettos. How thoughtful and generous of Sharon!

Joe's been gone four nights and there are two more remaining. Blackberry thoroughly enjoyed the dinner party, but once it was over, he became despondent, just not understanding why Joe wasn't here. We've had some nice walks and quiet moments together, but he just isn't himself. Friday after work I stopped at the pet store and bought four new things for him: one for each of the remaining days of lonesomeness. Friday night's bone was just the thing he needed, and he gnawed and gnawed and threw it around. Yesterday morning I gave him a small purple stuffed squeaky toy and it, too, was a hit. He already knows it by name, as in, "Where's That Purple Thing, Blackberry?"

Between the sewing, the socializing, and the dog entertaining, I'm busy enough. And will be very glad to come home from work on Tuesday to find Himelf back in residence. Too bad I'll miss The Reunion when he comes through the door!

Janet O. said…
Looks like a wonderful evening with friends. So much more comfortable in a home atmosphere. I was wondering what everyone was holding. : )
Sounds like you are taking very good care of Blackberry and Joe can leave you in charge with no misgivings.
Sunday, August 26, 2012 1:13:00 PM

Pat said…
It was a fine evening, and a good time was had by all! I'd love typo be a fly on the wall to see that reunion myself. Maggie the Wonder Dog gave me good going-over when I got back home, smelling of a good dinner and handsome dog.
Sunday, August 26, 2012 2:13:00 PM

howdidIgethere said…
Perhaps you should warn "himself" that he may be bowled over, literally, at the door!

Thanks again, for being the wonderful hostess, Nancy. Thanks to all the others for being such good companions. And thanks to Sharon for the lovely stilettos!
Monday, August 27, 2012 10:24:00 AM

Barbara Anne said…
What fun your party must have been! There's almost nothing better than great girlfriends and good food! Sharon's gifts for everyone was certainly thoughtful of her.

You're certainly a good dog mommy!