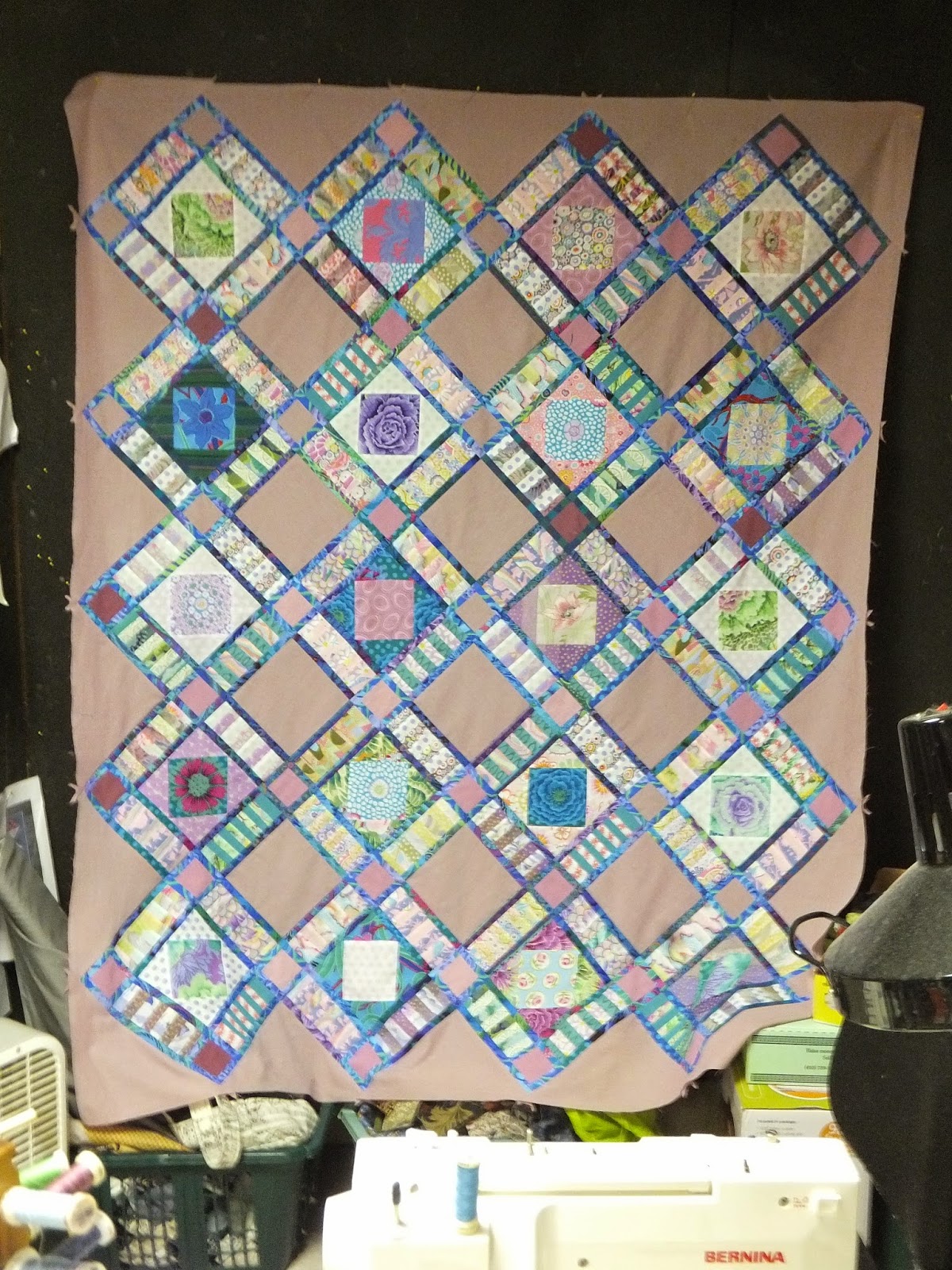 It all started when Julie wrote a post about an antique quilt she had seen and had been inspired to make her own version. She shared a picture of the original and immediately I became smitten. I started a leader-ender project and -- as so often is the case -- it demanded to become a main project.

Julie had called the lattice "tracks" and that seemed a good name to me. And right around that time, my dear son-in-law posted a Facebook rant on the unlikely subject of a name change for a regional rail route. It seems that the R5 is no longer to be called the R5 but rather the Doylestown Local. He was quite distressed about this, and I hastened to point out that many, many years ago -- long before the routes were numbered (R2 went to Warminster and R5 went to Paoli and Doylestown) -- that very route had been always known as the Doylestown Local.

And I continued to make ties and apply rails and construct junctions and create stations and knew this  quilt would be the R5.

I'm so pleased with it. The fabrics are about 95% Kaffe Collective with just one or two others included. The solids are Kaffe's Shot Cottons.

All aboard the R5 . . . or the Doylestown Local if you prefer.

Karla said…
I love this quilt. I was on the Warminster train (R2) when I saw a picture of the R5 on FB. I showed the conductor and his eyes lit up and grinned ear to ear and said "Oh WOW". The R5 was Gus' train that he worked. Brings back the good memories. -Ask me in private about one of them-. Did you know Market East (the old Reading Terminal) is now Jefferson Station. I was very confused when they announced that one. <3
Thursday, November 20, 2014 8:05:00 AM

Quiltdivajulie said…
How I love your interpretation!!!!!

And the stories that go with R5 are priceless!!!

Barbara Anne said…
Applause, applause! What a glorious quilt R5 is and I love that you can see flowers from the "tracks"! I rode the train on the Southern line nearly every summer when I was a child and loved the peek into gardens, neighborhoods, and towns as the train moved on.

Here in Richmond, the bridge over the James River to Westover Hills is called The Nickel Bridge by the old-timers and me because it cost a nickel to cross it when it opened and for many years thereafter. I learned the name from my grandmother. All of those nickels were supposed to pay off the bridge costs and then it would be free. Didn't happen, the fare has only gone up over all these decades.

Susan said…
It will always be the R5 to me. Rode it nearly every day for the two years I was in grad school at Hahneman, but now we lead a more suburban life and only use it occasionally. Love the quilt!
Thursday, November 20, 2014 6:07:00 PM

OTquilter said…
Just wonderful! This reminds me of a Kaffe pickle dish interpretation with all those little pieces.
I'm a former rider of the Chester-Wilmington Local!
Friday, November 21, 2014 4:10:00 PM