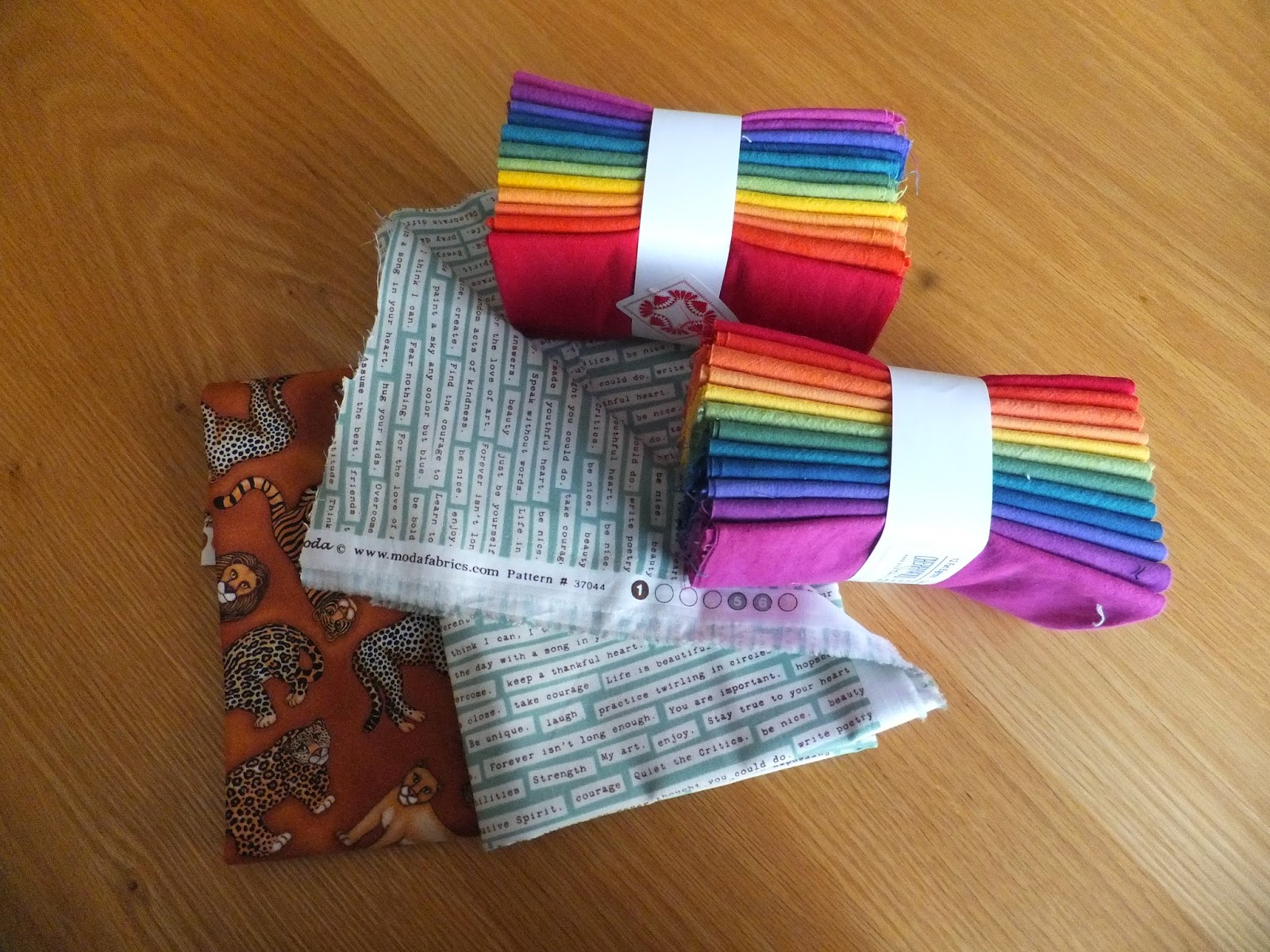 So, Bobbi and I went out to the AQS Show in Lancaster yesterday and had a right nice time. The show isn't as big as the old Lancaster show at the Host used to be, but that's okay. The quilts were stunning and the special Wicked exhibit at the Cherrywood area was fascinating. We did a little shopping, but not a lot.

First the fabric. I don't know what I'm going to do with those wild cats, but I had to have a FQ of them. Please click to enlarge and see their intense faces!

And while you're enlarging, look at the selvedge on the Odds and Ends by Moda. It's the same fabric I used for the "labels" in the clothing I made for Aberdeen, just in a different color. Some folks had asked what fabric it was, and I didn't have the selvedge any longer.

Those rainbow F8 bundles are Cherrywood. 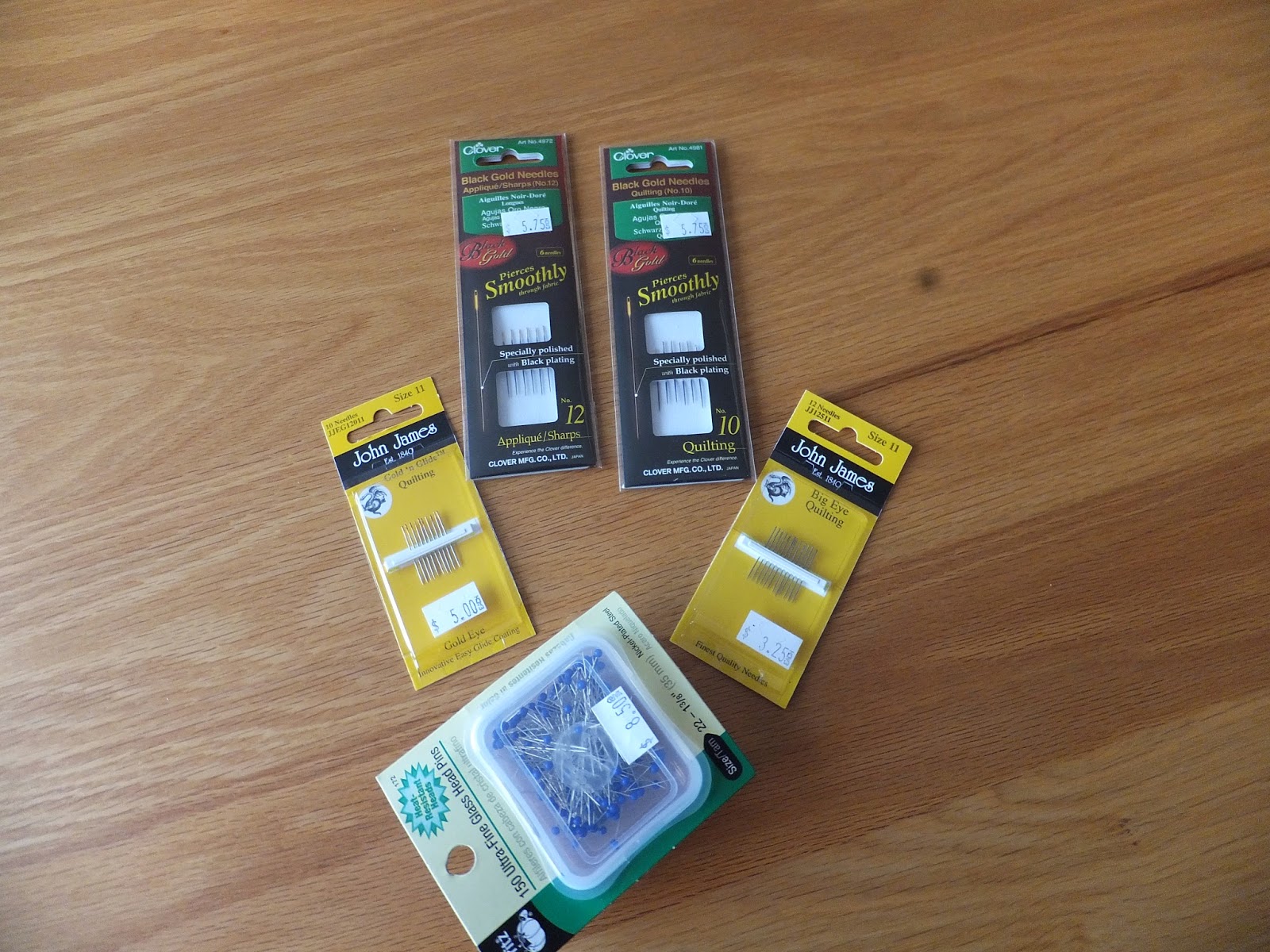 Over lunch (a really good taco salad, by the way and when was the last time you had one of those?), Bobbi was talking about some needles she had bought for hand sewing. She said they were not inexpensive, but were wonderful and my interest was piqued.

I found the stand where she bought them, and spent a fair amount of time there looking at the vast selection of hand-sewing needles. I decided since I'd not really spent a lot of money on fabric, I'd buy a variety of good hand-quilting, hand-sewing needles and try them out to see what I liked best. I also bought a box of nice new pins (my supply is dwindling and deteriorating), and since Elizabeth's blog is and pins, she gets a shout-out today.

Barbara Anne said…
What fun to go to a quilt show with a like-minding friend!

DH and I fix taco salad several times each spring and summer because we think it is so yummy.

Love the Cherrywood fabrics and appreciate the information on the Moda fabric. Goodness, those wild cats seem to be looking at you with a "Hello, breakfast" look in their faces!

Denise in PA said…
Thanks for the recap of the show! Glad you both had a good time! I'd love a review of those needles after you use them. I'm doing a lot of hand sewing these days and am always on the lookout for good needles!
Friday, March 13, 2015 10:35:00 AM

LizA. said…
Sounds like a fun day. My BQF is heading over from Spokane today so we can head west over the mountains to a fairly large, and always wonderful show tomorrow -- must be the season.
Friday, March 13, 2015 11:27:00 AM

Janet O. said…
Love those Cherrywoods! And the fabric you used for the clothing labels is awfully cute. As to the big cats, sometimes you just have to go with a whim. I'm sure they will find a home.
I have used some of those needles and have been pleased. I believe my pin supply could use replenishing, too, now that you mention it.
Friday, March 13, 2015 11:39:00 AM

Susan said…
Just got back from the Lancaster show. My friends and I thought it was a lot smaller than the last time we went (two years ago). Nothing really jumped out as a must-gave for any of us but I was the only one in the group who left without buying fabric. I did manage to acquire a new iron and one pattern though.
Friday, March 13, 2015 7:15:00 PM

Judi said…
It's always nice to go to a quilt show with a friend!

I see you bought some of my favourite pins AND needles - hope you like them. I also like Roxanne needles, partly because they come in packs of 50 so you are encouraged to renew your hand sewing needles regularly....like you do a machine needle :)
Saturday, March 14, 2015 5:37:00 AM