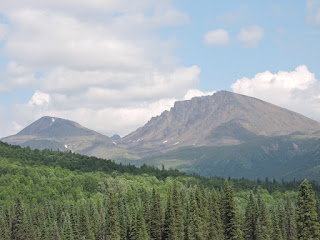 Wednesday was our full day in Denali Park. We were up very early (but we were kind of getting used to this) and were shepherded onto a comfortable bus that was equipped with screens here and there.

We traveled deep into the park, in areas where only buses were permitted. The idea is to keep the wilderness wild, and limit the contact that the animals have with humans.

The purpose of the screens on the bus was to help with sightings. We learned the convention of using a clock face when we would see wildlife, calling it out as "Moose at three o'clock!" The bus driver had a camera with a telescopic lens, and he would find the moose and project it onto the screens inside the bus. This way, those who didn't have fancy cameras could see the animals well.

We saw many animals: moose, bear, chipmunk, birds, Dall sheep. We saw miles and miles of gorgeous scenery and I was impressed at the contrast between the immensity of the mountains and the tininess of the wildflowers.

Following are some of our pictures from our full day in Denali. The next morning we were back at the depot to catch the train for a full day's ride to our next destination. 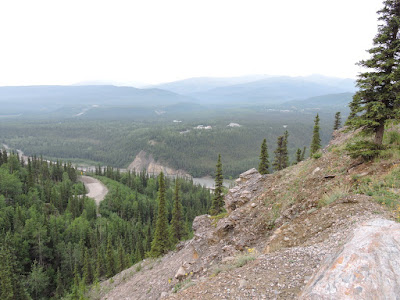 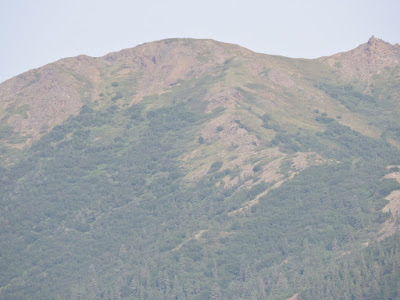 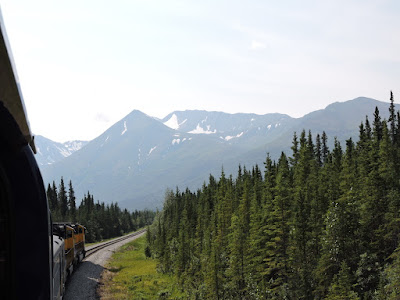 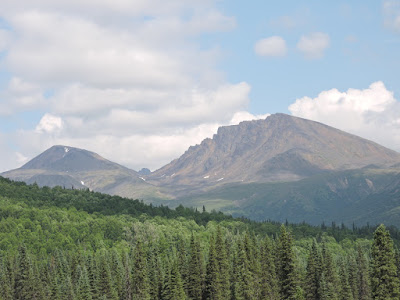 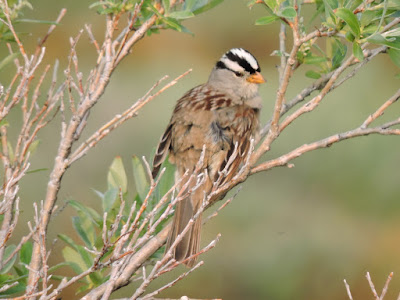 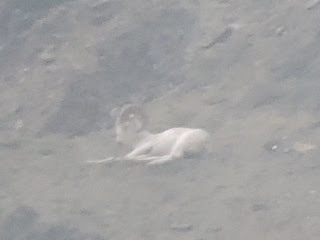 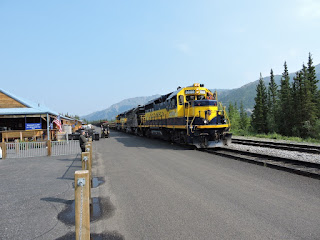 On Thursday morning, after another delicious Denali Lodge breakfast, we headed down to the depot to move on to our next destination. The depot, fortunately, was spacious and fairly comfortable. We were there for a long time because, once again, the train was late.

We finally boarded around lunch time, and again were in the first car with the glass dome. We enjoyed lunch on the train, and stopped briefly in Talkeetna where some of us got out and walked around on the platform. We passed Wasilla, but that city's most famous resident was nowhere to be seen!

Joe again spent a lot of time on the observation platform, and I enjoyed the beautiful scenery and spent some time catching up on my journaling. Dinner was served on the train, and at last we arrived at our destination. 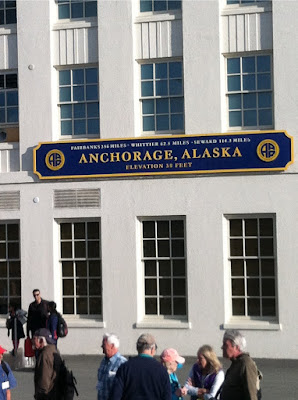 We had thought we might have the opportunity to do some exploring in Anchorage, but that was not to be the case. Although it looks like broad daylight in this photo, know that it was well after eight o'clock at night!

We were transported to the Anchorage Marriott, tired from our long day of travel, and didn't venture out because we needed to get up at four o'clock on Friday morning. Although the hotel's restaurant wasn't scheduled to open early, arrangements had been made for a breakfast buffet to be made available to us at five o'clock.

And then it was off to the airport. We'd been pretty much off the grid for a week, and as we waited for our flight, most of us turned on our phones to find the SCOTUS decision about the Affordable Health Care was in the headlines. Even as we celebrated, those headlines went down and we learned that gay marriage was now legal throughout our country.

And then we were back on "airplane mode" because our flight was ready to leave!

Janet O. said…
I would love an experience like this. Thanks for the photos of all the beauty that surrounded you! Can I be jealous?
Wednesday, July 22, 2015 6:32:00 PM