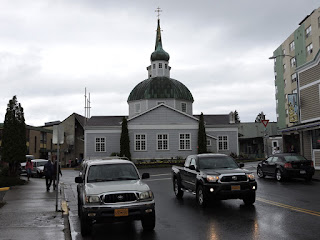 Our flight took us to Sitka, and if there is a tinier airport anywhere, I've certainly not seen it! We arrived mid-morning, and really didn't know what was in store for us. We were scheduled to board our ship in the late afternoon. We needn't have worried (not that we did, actually). Two women from Orbridge were at that tiny airport to meet us, and very quickly we were on a bus that took us into downtown Sitka.

We were taken to the main drag where a storefront had been turned into a Hospitality Suite for Alaskan Dream Cruises. The thirty-four of us joined another fifty-or-so people. Some of those people were joining our group; the others had disembarked from this ship that morning and were waiting for their shuttles to their flights home. There was a secure place for luggage storage, a bathroom, games to borrow or purchase, computer and wifi, and an assortment of chairs and sofas. There was coffee and there were water bottles, breakfast-y rolls, and we were told that lunch would be served at one o'clock. We noted the time and headed out to see what was to be seen in downtown Sitka.

Literally in the middle of town, in the middle of the street, even, was St. Michael's Russian Orthodox Church, an important piece of Sitka's history and pictured above. We walked around outside and thought about going to see the inside, but when we learned the cost was $5 per person, we crossed the street to another church, where we looked around for free, were offered a guided tour and a bag of popcorn! Feeling right at home, we declined the tour, but spent some pleasant time with the ELCA volunteer who showed us around.

One of our group took a stunning photograph of a bald eagle perched atop St. Michael's cross. He called it "Bird of Pray." 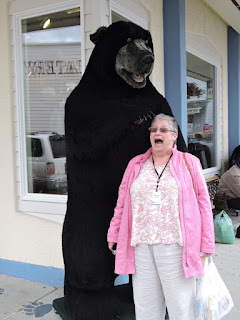 Then it was off to see the shops and experience some of the local color.

Joe had learned from some of the previous week's ship passengers that a terrible head cold had made the rounds; many passengers were sick and one even developed pneumonia. Eager to be prepared, my first stop was a drugstore where I purchased cold and cough medicine as well as a small supply of anti-germ wipes.

Then we wandered in and out of the shops. One place sold furs. We quickly understood that the prices marked were simply suggestions and that bargaining was welcomed. I spent some time stroking a sea otter scarf, truly the softest thing I'd ever touched. But we didn't purchase anything; I can eat meat, but don't think I can wear skins. Someone was selling books for children with a local theme, and we picked up a couple of those to put away for grandchildren and a few other very small items to save for Christmas. 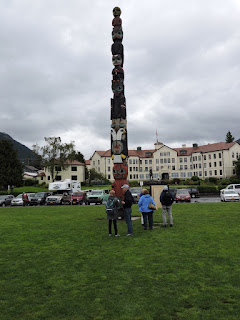 There were a lot of shops, some more interesting than others.  One of our group returned to the Hospitality Suite sporting a University of Alaska sweatshirt he'd picked up in the local thrift shop.

We saw our first totem pole in Sitka.

People were pleasant, laid back, and helpful. Interestingly, the post office doubled as a shop for locally-made gifts.

Soon it was time to return to the Hospitality Suite. We enjoyed a delicious lunch and then consulted the scheduled that had been provided for us.

We still had three hours before we could board our ship, but every minute of that time was to be filled in the most interesting ways! 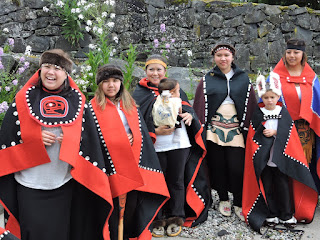 First, we walked about a third of a mild to the Sheet'ka Kwaan Naa Kahidi Clan House, a property owned by the Tlingit people.

These lovely people in their gorgeous native outfits performed several traditional dances for us and also educated us about Tlingit culture.

One of the things we learned was that the Tlingits are separated into two parts, Eagle and Raven, and only inter-marry. An Eagle woman would marry a Raven man. Or vice versa. 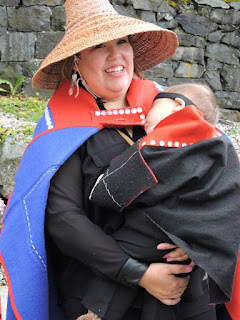 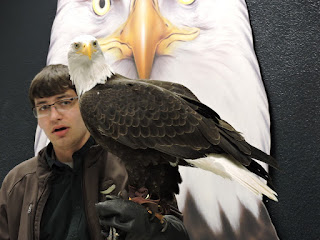 After the dance performance, we were off to The Alaskan Raptor Center, home of a bald eagle hospital and raptor education center.

Injured eagles, hawks, owls and kestrels are treated at this wonderful place. If they are able to be completely healed, they are released back into the wild. If not, they either stay at the Center and are used for educational purposes or sent to other educational institutions. 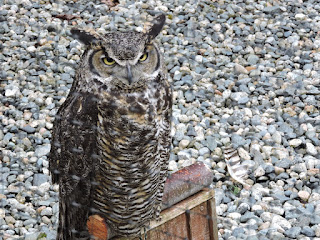 We saw many different raptors, some up close and very personal, others at a little more distance. They were beautiful.

The eagles were impressive. I like the idea that they are our national bird.

But I'm an owl kind of gal. 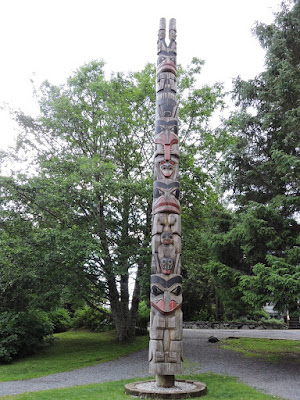 By the time we left the raptor center, we were tired. We'd been up since 4:30 and had been kept very busy. The day had passed so quickly! We were ready to crash, but there was still an hour until we could board the ship.

Not to worry! Just a short bus ride away from the raptor center was our last cultural stop of the day: Totem Park, part of the Sitka National Historical Park.

I always like the orientation videos at the National Parks, and this one was excellent. "The Voices of Sitka" told how the Tlingit, Russians, and other cultures came together in this area. There were displays on Tlingit clothing and Russian icons. It was excellent.

There was a whole wing in the museum devoted to how totem poles are made, and outside in the woods, there were many examples of totem poles. Our day in Sitka gave us a real feel for the Tlingits and for the way their culture had to blend in with other cultures.

And then we were off! As we came around the curve on the way to the dock, we could see the Admiralty Dream waiting for us! 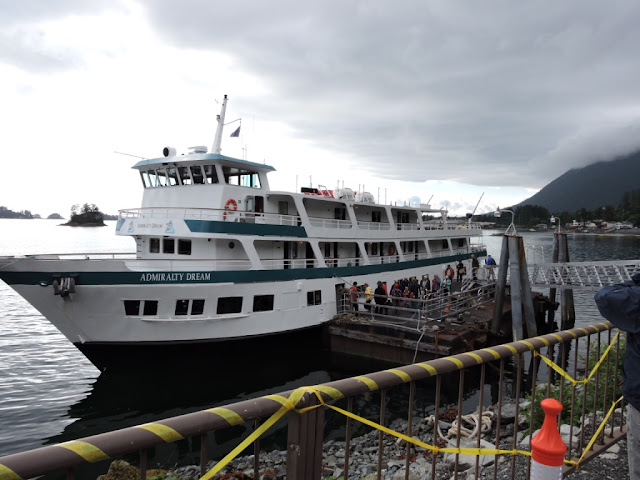 Barbara Anne said…
Fascinating story and you tell it so well!

Hope you, Joe, and the others didn't get that ship-board head cold.

Synthia said…
What a wonderful travelog! We've been to Alaska and experienced the 'inland' sights, but have not taken a cruise so I especially enjoyed the 'coastal' reports.
Thursday, July 23, 2015 11:04:00 AM