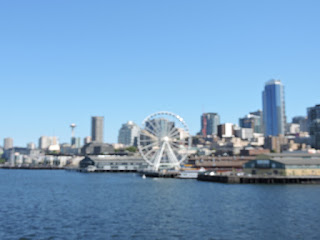 We flew out of Philadelphia on the morning of Friday, June 19, lost a handful of hours in the sky, and arrived in Seattle in the mid-afternoon.

The airport is big, but pretty well organized. We were able to find our way to the train that took us into the heart of downtown.

What a terrific city! Here's what I noticed: Cleanliness -- not much in the way of litter anywhere. Diversity -- all kinds, colors, and styles of people in Seattle. Probably the most diverse place I've ever been. Ecology-minded -- recycling matters to Seattle; and they make it easy to do. Easy -- not hard at all to find our way around. Hilly -- different from downtown Philadelphia! We lugged those suitcases behind us up hill and down as we made our way from the train station to our hotel. And, yes, Starbucks -- everywhere you look.

We were booked at Motif Seattle, a wonderful choice. A sleek, chic hotel, it was comfortable in every way, and located close to everything that we needed. After settling in and doing some minimal unpacking, we went outside to find temperatures hotter than we'd left in Philly! We walked down the hill to Pike Place Market and quickly became overwhelmed. We had no idea how huge this place was! We made a short stop at Undercover Quilts, a nice enough shop, but purchased nothing. An ice cream cone took the edge off both the heat and the hunger that was developing, and we returned to the hotel for a little nap.

A restaurant close to the hotel with the unlikely name of Elephant and Castle (turns out to be a chain, primarily Canadian) with a kind of British feel provided dinner (bangers and mash for Himself, steak and mushroom pie for me), and at that point we were whupped. We had big plans for the next day, so off to sleep we went. 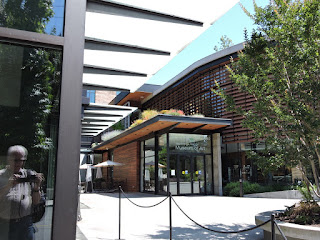 Saturday morning we had the European Breakfast at Frolik, the restaurant located on the fifth floor of the hotel, where we saw two male midgets (one young and one older) and speculated as to whether they were a father-son duo or had a more interesting relationship. Alas, we never found out, and were quickly off on a walk to the ferry terminal.

The ferry ride to Bainbridge Island was pleasant, and about 40 minutes long. Our first stop was the charming art museum close to the ferry terminal. We did some shopping in their gift shop, and then walked into the central business district.

Bainbridge Island is as charming a place as I've ever been. Peppered with delightful shops of all kinds, it was definitely my kind of place. Joe needed to explore what was going on down at the marina area, and I was happy to let him go so that I could explore the shops unencumbered. The record must show that I was in a second quilt shop in two days where no purchases were made! But I did have a nice time looking around. My sense of Bainbridge was that it was primarily a summer place and that those who came to stay came from money.

I met Joe at a prearranged location and we had a delicious lunch at a place whose name I no longer remember. More walking, more exploring, a gelato, and then back to the ferry for the ride home.

Lori said…
You were at my growing up stomping grounds:) Enjoyed the weekend before you were there downtown!
Saturday, July 18, 2015 6:29:00 PM

Barbara Anne said…
How interesting! I've never been to the Northeast so thanks for taking me along!

No purchases as the first two quilt shops? What amazing self control you have.

Janet O. said…
Trying to catch up with you. I love Seattle. Haven't been there for many years, but have spent good times there in my past. Reading this makes me want to go back soon!
Monday, July 20, 2015 1:42:00 AM