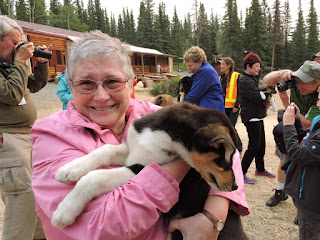 The bus left, as usual, early on Tuesday morning. We had signed up for an excursion to visit Jeff King's ranch and to learn about The Iditarod.

The trip out to the ranch didn't take very long, and as soon as we got off the bus, someone asked if we wanted to hold a puppy. Well, yes, we did.

We learned so much about sled dogs, about the Iditarod, and about life in Alaska.

I was fascinated to learn that litters of puppies would have themes for names. Puppies from one litter would all have names of famous perfumes; those from another litter would be different rock stars. One litter apparently was named for criminal activities -- we liked a dog named Burglar and another called Suspect. 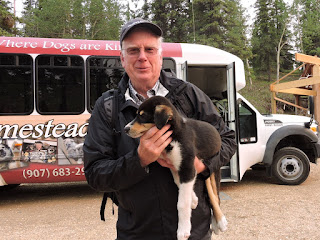 The litter named for jazz musicians included Coltrane; Caruso was from the opera stars group. We enjoyed this.

We loved watching the dogs and seeing their excitement as they noticed that a training run was about to be initiated. 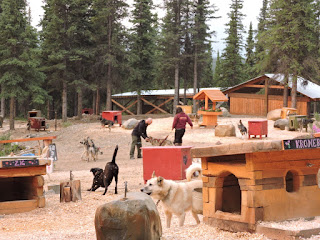 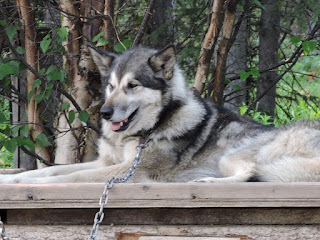 After the Iditarod presentation, we rode the shuttle into Denali National Park, where we viewed the orientation film, had a delicious lunch, and visited the bookstore. I was happy to purchase a National Parks Passport and collect my first sticker. I would end up with a few more before we got home!

Each afternoon, the Park also holds a sled dog presentation, and we enjoyed learning how these dogs (also named in groups) do their work, helping to keep the Park in order during the long winter season. 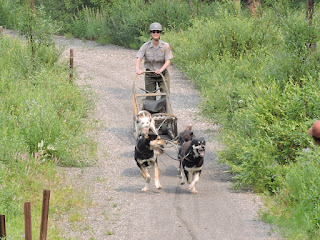 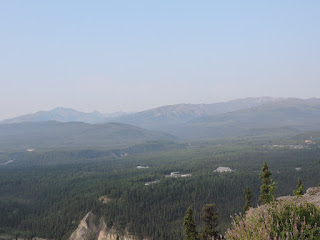 That night we attended a reception and a presentation back at the lodge; the honored guest was a young man who had made and achieved the goal of climbing Denali Mountain. His presentation was polished and interesting; he explained that while many people know the mountain as Mt. McKinley, he thought of it as Denali Mountain, the name given by the Tlingit people.

Barbara Anne said…
Fascinating! Love the dogs and the information about their names.

I had never thought that Mt. McKinley already had a name when it was given the name we find on maps now. Of course, it stands to reason the people there would have already named it. Mt. Denali it is!

Long ago we had friends who had named their Husky a very long Tlingit word(s) that meant "When God comes in, the devil goes out" but the dog's nickname was Topwa.

Janet O. said…
Very interesting stuff. Those "puppies" aren't very small.
I love the insight into the dog names. : )
What a wonderful adventure you had.
Interesting that someone felt the need to rename a mountain that already had a perfectly good name. I shall try to remember its real name.
Tuesday, July 21, 2015 12:18:00 PM

AnnieO said…
That is a funny way to be greeted--do you want to hold a puppy? I can't think many people turned it down :)

I knew that Denali was the original name of the mountain and was renamed later. At least the park is still called Denali! Sounds like you continuously had a great experience so far.
Tuesday, July 21, 2015 11:38:00 PM