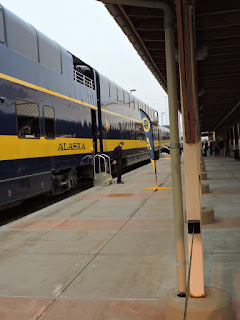 Monday morning found us up early. I'd be tempted to say it was "before dawn," but the sun "went down" around midnight and was "back up" at 2:00 a.m., and our observation was that it didn't go all that far down when it did go down! Suffice it to say 5:00 came around quickly and our guide had advised us to skip the hotel breakfast because better fare awaited us.

The train station in Fairbanks was a big and bustling place; despite our early arrival, we had plenty of time to wait and explore before boarding our train. Orbridge had arranged for us to be in "A" Car, the very first one behind the engines, and we climbed a circular staircase to get us to the glass-domed observation car.

We would be spending much of the day aboard. 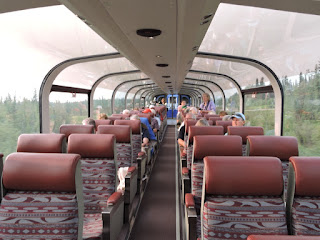 The seats were comfortable and there was an outside observation platform where Joe spent most of his time.

We hadn't gone very far at all before the steward invited us to go downstairs to our private dining car, where we ordered a delicious breakfast.

The trip was supposed to be about 4-1/2 hours, but someone in a rear car experienced a medical emergency, and this caused us to stop for a time while the person was taken from the train to an ambulance to well, we never did find out where!

It was a beautiful trip. 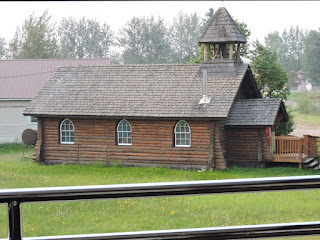 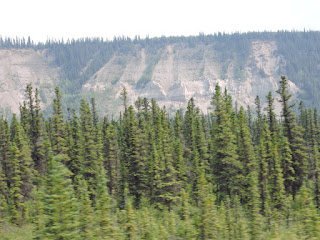 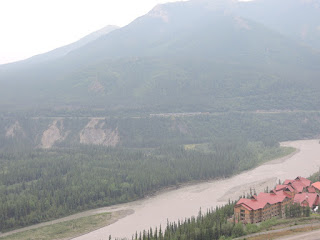 The Lodge is not-really-rustic and comfortable. All of the rooms have a view of the park and are a very short walk from the main lodge. A buffet breakfast is included. The room was comfortable and had darkening drapes that we tried not to use.

We were dependent on buses to get anywhere, since the lodge was located at the top of a mountain. There were lodge-run shuttles that went to town, to other resorts, and to the park. Other times we used buses that had been arranged for our group.

That first night we went out on an excursion. We had signed up to attend a dinner-theatre, and we had such a good time. The seating was at long picnic tables, and the food was family style served by the men and women who would later appear in the performance. The salmon was delicious, as was everything else. The play/musical had a very loose plot, and was about life in old-time Alaska.

Susan sent me the link to your blog. My family lives in Fairbanks. I'd love to take your tour just once bc when I go home, we pretty much stay in an around town! It's wonderful reading your commentary. I WILL do this some year after I retire!
Monday, July 20, 2015 11:32:00 AM

Barbara Anne said…
What a great train trip to let you see lots of an interesting part of the world. Was Joe sketching like crazy while in Denali?

I am looking forward to where you went and what you did next.

Karla said…
Thanks so much for sharing your trip with us in such a delightful way!