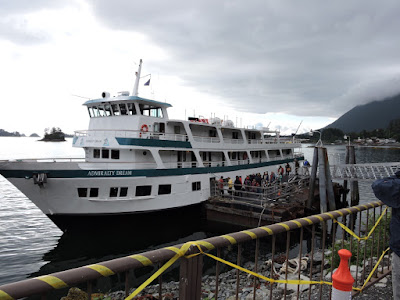 Admiralty Dream was to be our home for a week.

We had thought of cruising in Alaska before, but our only cruising experience had been aboard Star Flyer or Royal Clipper, each holding a maximum of 150 or 225 passengers, respectively. And neither was ever totally full. We weren't sure we would be comfortable on a huge vessel holding 1000 or even more passengers. Perhaps we are ship snobs.

This trip through Orbridge was offered by my husband's university alumni association, and when we learned that there would be fewer than 70 passengers, Joe jumped at the chance. We were in Cabin 204, located on the lowest passenger deck between the lounge and the dining room. The cabin was very, very tiny -- we were happiest when only one of us was trying to move around at a time. What we really liked, though, was that we could leave our window curtains open all the time. The other two decks had slightly bigger cabins, but opened out directly onto the deck -- people could walk by at any time and peer into the room. We never had that problem! I was to spend a fair amount of time in the lounge, and it was nice to be so near to it. The kitchen is just on the other side of the dining room; the ship's baker worked the graveyard shift, and many nights I would awaken around two o'clock to the enticing smell of vanilla!

Those of us who had done the pre-trip in Denali were joined by about thirty new faces in Sitka; it didn't take long for assimilation to take place.

Everyone was provided with boots and rain parkas and rain pants as well as a personal set of binoculars. There were binoculars here and there throughout the ship, too. The food was delicious and ample; in addition to the regular three meals each day, Cooky Time took place around three o'clock each afternoon and lovely hors d'oeuvres at 5:30.

Turnaround for the ship had to be efficient. It would dock around 7 or 8 on a Friday morning and had to be ready to sail out at 5:00 in the evening. Supplies had to be loaded and everything had to be cleaned. When we came aboard and had our initial meeting with the Captain, he said to us, "You'll have to excuse me -- I've been up since 4:00." To which we all replied, "So have we!"

We were delighted to have Lynette and Sue, two naturalists, as our guides. They shared so much information with us, and also led hikes and kayaking for those who wanted those activities.

Saturday was mostly spent settling in, getting to know each other, and experiencing the newness of Alaska as we traveled through Icy Strait. We spent a lot of time on deck and were excited to spot whales, otters, and a variety of arctic birds. The guides teased us with a daily forecast: "In the low 60s with 50 percent chance of variable weather!" and it did rain for a short time every afternoon and/or evening -- we had experienced this at Denali, also.

How wonderful to have found that alumni association trip!

OT Quilter said…
I have been enjoying your trip vicariously, and it sounds just wonderful. We went on a 3 week alumni trip to Turkey in 2011 and were totally sold on alumni travel. Thanks for sharing your adventures!
Friday, July 24, 2015 8:06:00 PM

suz said…
this type of trip is on my bucket list! When I was finishing college back in the late 60s I had an opportunity to teach in that area, but I thought it would be boring...one of the few things I've regretted in life was not taking that job! Thank you so much for sharing your trip with us.
Monday, July 27, 2015 8:47:00 AM