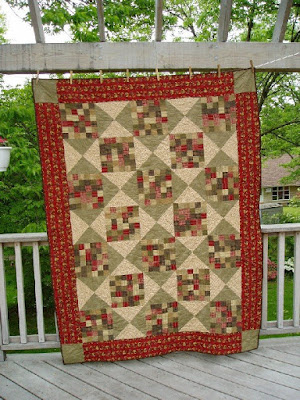 Thirteen years ago, in the very, very early stages of being a blogger, I wrote a post about my friend and neighbor, Frank. His eighty-fifth birthday was coming up and I was making a quilt for him.

Frank and Maggie were living in the house next-door when we moved into this house twenty years ago. We spent many happy years going downtown to dinner and then the orchestra concert. We dined out together locally. We entertained each other at home.

A very liberal Democrat with a winsome chuckle, Frank was also a cook with a limited repertoire. As Maggie said, "What he made, he made well." His specialties were flan, garbanzo soup, and the most marvelous concoction, eau de vie, which he made each Christmas for adult consumption. A native of Cuba who emigrated to North America, he lived in both Canada and the United States and fathered four children.

howdidIgethere said…
Sorry to hear of Frank's death. I know he had been quite ill for a while, but it's still a shock when it happens. Someone once said that no matter how well you think you are anticipating the end, you can't grieve in advance. Lovely quilt for a lovely man.
Sunday, December 15, 2019 7:39:00 PM

Carol- Beads and Birds said…
It seems that Frank had a good life and wonderful neighbors. It's so hard to lose our favorite people. You are so lucky to have shared that friendship.
xx, Carol
Monday, December 16, 2019 8:35:00 AM

Quiltdivajulie said…
Sending hugs to all -- you've mentioned him several times through the years. So hard to lose a friend.
Monday, December 16, 2019 9:31:00 AM

Barbara Anne said…
A well lived life, indeed, and who can ask for more - except to get to age 100. May the good memories of this good man bring comfort to all who loved him.

And I have to agree with your long ago decision to bind the finished quilt for Frank because you can't give a quilt IOU to an 85 year old!