Oh, Midge! Knock It Off! 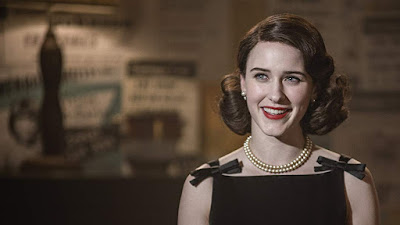 I'm a person who watches precious little television. We try not to miss a Masterpiece Theatre series, and, of course, there's The Midwives. But beyond that, our 367 channels are wastefully unused. I really should do something about reducing their number. If I can.

We do use Netflix and Amazon Prime to fill up our evenings. We get to see a lot of movies that we missed when they were in the theaters. By the time we get to one of the specially created series, it is usually the second or third season and we're fine with that.

What we're not fine with is the language on most of the programs the screen has to offer. It's the "F word" in particular. It's used to the point that it's now meaningless. There was one show -- the name will come to me -- that had been highly recommended so we were eager to try it. The first episode involved the untimely death of a character named "Snot Boogie," if I remember correctly and I do. After approximately 39 F-bombs in the first 13 minutes, I retired to the other room and my book. "The Wire." That's what it was called. (I can't remember that but I can remember the name of the deceased character who never appeared on screen. Go figure.)

Of late, we've been catching up with the applauded Mrs. Maisel. I do like the characters (Susie in particular). And the premise. And the clothes (oh, the clothes!). So we stay with it, despite the F-ing this and the F-ing that and F-you that are practically constant. The F-word is as abundant and prolific as the cigarettes were in Mad Men. And I find that unrealistic. I was alive and I was working during the time period of these shows and I'm here to tell you that Mad Men captures the culture better than Mrs. Maisel (isn't it interesting how they are both MM?). Back then, "F" was saved for when it was really needed; it was impactful (ew -- is that a word?) and generally met with shock and revulsion. The Urban Dictionary calls it "the strongest weapon in one's verbal arsenal" -- isn't that grand? And with "F" so cheapened, what is left to stock one's verbal arsenal?

There are other expressions on Mrs. Maisel that are far more recent than the 50s. "Give it up for" as an example. I've found myself using the word anachronism for the first time(s) ever.

We got through Season One despite the language. Because of the characters, the premise, and the clothes (she has so many gorgeous coats!). Season Two has been more F-ful and I felt like the whole Catskills thing was prolly hugely exaggerated. We're a couple episodes from the end and looking around to see what we might want to watch next because we're not excited about Season Three. But my friend Bobbi who knows a lot more than I do about television (and lots of other things) implores me to stick with it; she says it gets better. I hope she's right.
Email Post
Labels: Rants

Janet O. said…
Yeah, I can't tolerate that language. I see very little that is considered current or trending. But I really enjoyed "A Beautiful Day in the Neighborhood."
Saturday, December 28, 2019 7:38:00 PM

OTquilter said…
Okay, so we haven't watched Mrs. Maisel yet, but we share your frustration with so many many options and yet so few good choices. For those evenings when you need something lighthearted, try "Death in Paradise" on Netflix, a series about the police force on a Caribbean Island; it's so much more fun than the title would have you believe. And the 3 part documentary about Bill Gates, "Inside Bill's Brain," a fascinating look at Bill Gates, his life, and his determination to help in meaningful ways. It's compelling and humbling, plus it includes the best trip idea ever: a "Think Week," a bag of books, a cabin, and thou. Perfection.
Sunday, December 29, 2019 6:31:00 PM