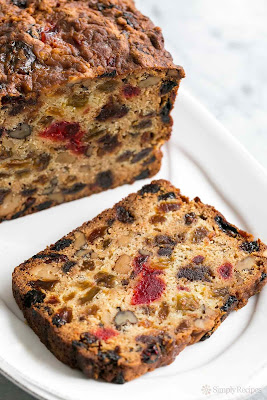 These past few days in my little corner of Facebook, there has been chatter about fruitcake. Who loathes it and who likes it, no one is indifferent. I'm in the camp that loves it and doesn't mind saying so. Turns out a cousin all the way out in -- gasp -- California is in my camp. So does my sister. There's a gene involved, I think.

All of this got me to drooling with anticipation. You see, my sister-in-law makes the very, very best fruitcake I have ever had. Bar none. And each year she sends one to Himself and me, along with a tin of her homemade buttercreams, fudge, divinity, and a couple of other culinary confections. And said parcel was due to arrive any day now.

Janice lives in a part of Texas so remote that up until very recently when they got some kind of a dish, they only got one television channel. No internet. None. No Facebook, no Amazon, no blogging, no internet whatsoever. Somehow there is cell phone reception. But that's it. I visited there once, and at night it was so dark due to lack of streetlights that I couldn't see my hand in front of my face. But I digress.

The package arrived yesterday! The buttercreams look delectable. The fudge -- both chocolate and peanut butter -- was there as was the divinity and the pecan clusters and a couple of other things that we don't know the names of, just that we are glad she makes them.

There was also a note: She'd been to a couple of stores and no one had the citron bits and candied cherries that she always buys, so, alas, no fruitcake this year.

I felt like a little kid who'd just learned the truth about Santa Claus. I was very, very sad.

But not for long. Janice may live in the boonies of the boonies, with no internet and a long walk out her road to her mailbox. But Amazon Prime is my friend.

The fruit jewels and candied cherries should reach her by Sunday. Monday at the latest.
Email Post
Labels: Family Food History

Nann said…
We love fruitcake, too. My quilting buddy Irene bakes it every year and we are fortunate to be on her gift list. She has reported difficulty in getting all the ingredients in the local stores, but she persists! (And she has my complete admiration for harvesting black walnuts and hand-picking them out.)
Friday, December 20, 2019 12:06:00 PM

Barbara Anne said…
I love fruitcake, too, and my aunt used to make the BEST and send one to my family every year in her Christmas box.

DH tolerates fruitcake, but about 7 years ago I found a recipe for "Lemon Extract Cake" that has the candied fruit but the cake part is lightly lemon flavored and is just delicious. DH and I both love it. This recipe makes two loaf-pan cakes or one tube pan cake. I'll send you the recipe in case you're someone who reads recipes for fun as sweet AMIL used to do and as DH still does.

Paula, the quilter said…
Yay, you! My mother would wrap her fruitcakes in brandy soaked cheesecloth and serve it with a hard sauce. Needless to say, I loved HER fruitcake. All others fail in the comparison. I know that hard sauce is usually on a bread pudding but Mom was innovative.
Friday, December 20, 2019 3:26:00 PM

Robby said…
My father loves fruitcake. Alas, he decided a whole cake for himself was too much and asked that I not order them any longer. I stumbled across a recipe for fruitcake cookies and thought of him. I tweaked the recipe to mimic his favorite fruitcake and sent them to him. He pronounced them even better than fruitcake (although I think this might be because they are two bite cookies so pre-portioned). I have also had to resort to Amazon to get the cherries the last two years.
Friday, December 20, 2019 11:21:00 PM