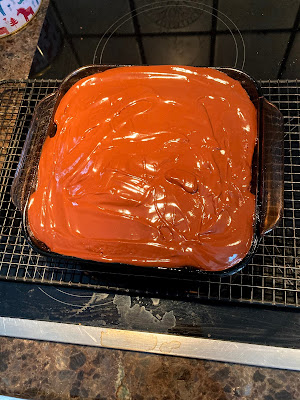 So, for the first time in ages, you discovered that the better part of a quart of whole milk in the fridge had gone sour. You, personally, hadn't bought any whole milk in many a year, but ever since Himself took up making ice cream, it's been showing up more and more. But there it was, a whole lot of sour milk.

So you looked around and found the treasured  Sour Milk Cake recipe and discovered that you  lacked an ingredient. A day or so went by and you managed to get what you needed. And, so, it was time to get started and you got out the biggest bowl.

You combined the sugar, powder, soda, cocoa and flour (noting that you must put flour on The List); you melted the butter and beat the eggs and added the vanilla to that mess. You made the well in the center of the dry ingredients and . . .

What sour milk? It wasn't there! It's hard to overlook a quart of milk (sour or otherwise), even in the most crowded of refrigerators.

Himself passed through and noted your puzzlement. You explained. "Oh, I threw that out," he reported. "It was sour."

He continued, "But I think I read somewhere that you can MAKE sour milk if you need it."

You went back into the fridge for the lemon juice . . . .

Vivian said…
Lol, That sounds like something that would happen in my house! And I'm sorry I hadn't read this sooner as I just poured out sour milk yesterday and didn't know you could make cake with it. I just found three recipes that sound just delicious and I will be trying them real soon --- that is, as soon as I go get more milk today!
Sunday, March 28, 2021 9:28:00 AM

Barbara Anne said…
Ah, the best laid plans! We have a list of ingredient substitutions taped inside one of the kitchen cabinet doors just for this type emergency.

Isn't it lovely to live with a man who can cook and make ice cream?!

Anonymous said…
Is it in the weather? I just threw out sour milk that was in my refrigerator today. Thanks for the laugh today.
Sunday, March 28, 2021 3:06:00 PM

Janet O. said…
Thanks for the giggle. Totally get that.