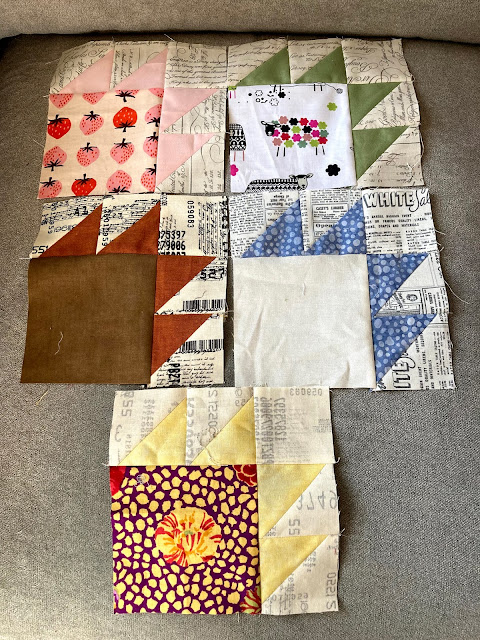 The second Zoom meeting for the Gotham Color Lab was held in February. I had read the Warm and Cool section immediately following the January meeting and made my blocks right away.

At the second meeting, we went "around the room" again and each person was invited to share the Warm and Cool Greens and Purples she had made. Some people had a lot to say. Some people had technologic issues.

This weekend I made my Seasons blocks. I started with the green fabric in the upper right corner. I thought it spoke of Spring. And it went with the sheep fabric which also spoke of Spring. Then I turned to Summer and made the strawberry block. I realized I was being influenced a bit by the design in the fabric. I wasn't sure whether the strawberry block was Spring or Summer. I decided it was Late Spring. The brown and rust is obviously Autumn and the icy white and blue is Winter. I was delighted by the serendipitous appearance of "WHITE" in the Winter block. Honestly, I did not plan on that! The yellow and purple block is Summer.

Then I began to work on the second part of the assignment.