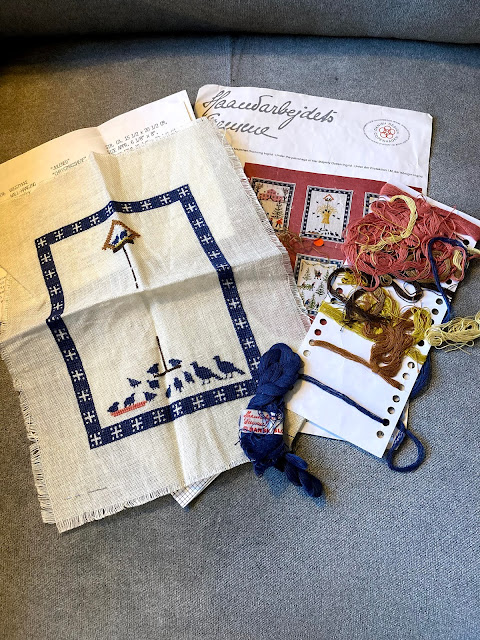 Yesterday, out of the blue, I somehow found myself cleaning and purging the Studio. It was so bad in that space that I was certain that the next knock on the door would be a masked representative from the Board of Health, come to shut me down.

I found six quilt projects so close to being finished that it was astonishing! I put each one up on the wall for assessment and then developed a list of exactly what is needed to finish all six of them. I do believe that three of them will be donated to Sanctuary Village when they are finished.

I also found a partially completed counted cross stitch project that has apparently been maturing nicely in its bag for about thirty years. I am certain that I haven't done any cross stitch in at least twenty-five.

I remember acquiring the little kit. It made me think of my dear husband, who has been a devoted feeder of the birds our entire married life. He would like it. And it would look pretty on our kitchen wall.  But did I have it in my to resume?

I thought about giving it away and then I thought again, remembering that there are times when I run out of quilt work to do in front of the television in the evening. I thought I'd put a plea out on Facebook to see if anyone local had one of those magnetic sheets and strip magnets that one uses for doing cross stitch. I thought someone might lend them to me.

Today I felt the need to go back downstairs and continue the organizing and possibly purging. And there in a box marked "embroidery" amidst an absolute mouse's nest of tangled floss, was a magnetic strip. So I plunged all the way in and there was the magnetic sheet! So I'm going to press the linen and let this become my travel project (yes, someday we will travel again) and also my filler project for those in-between times.

There were two additional cross stitch projects-in-progress. But I'm making no promises about them.

Quiltdivajulie said…
Hooray for finding what you needed in your very own stash - I used to do counted cross stitch (before genealogy which came before quilting). Making quilts won that tug of war, BTW.
Tuesday, March 30, 2021 8:21:00 PM

Janet O. said…
I salute you! Not sure if my eyes and/or brain could handle cross-stitch anymore.
And kudos for making a plan as to finishing the rediscovered tops. Looking forward to seeing them.
Tuesday, March 30, 2021 10:50:00 PM

Nemo said…
Lovely cross stitch project! I've rediscovered one myself - a scene from The Lion King, so I guess it must be about 27 years since I started it.. Our studios are treasure chests, always something surpricing to be discovered.
Wednesday, March 31, 2021 3:14:00 AM