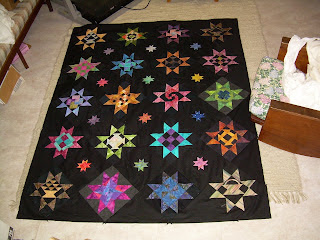 A few weeks ago I posted a picture of some blocks I was making for a swap. The swap was completed, and today the top was completed! I'm so excited -- I don't believe I've ever finished a top from a swap yield this quickly! When the blocks came in, they were just beautiful. I wanted one of every single set!

. . . .
Two of them were baskets, so I decided to see how the blocks would look set on point. I liked. I thought it would work well to have baskets in each corner, so I organized a side swap with Bonnie; we each made a pair of baskets and traded one. Inspiration struck about how to handle the alternate blocks: I was convinced that a miniature sawtooth star to echo the major sawteeth (?!) was the way to go. I think I was right.
. . . .
I don't generally photograph my quilts until they are quilted and bound, but this won't happen until late in the summer for this one, and I just couldn't wait to show it off!
Email Post
Labels: Quilts

Susan said…
Frabjous quilt! You know how I feel about both black and stars, so naturally I love it! I was thinking that was mighty fast stitchin'!
Saturday, April 28, 2007 6:42:00 PM

Tanya said…
Thanks for the comment and the advice. I'm going to get to work this week.
Hey, and that is really a superb star quilt! The colors are gorgeous! Did you all request dyed fabrics? Everyone must really be experienced quilters because those blocks in the stars took pretty small! Looking forward to more pictures.
Saturday, April 28, 2007 7:00:00 PM

Nicole said…
That turned out to be quite stunning! I always think a quilt top is practically a done deal when it is finished, so I take its picture to share. Once it is quilted, I take another one and share it again!
Saturday, April 28, 2007 9:25:00 PM

Patti said…
Looks terrific! Looks like your artistic "muse" was inspired from the moment you got the swap blocks back. This will be spectacular when finished!
Sunday, April 29, 2007 12:43:00 AM

Mrs. Goodneedle said…
It's incredible, black is the perfect background color... the stars simply sparkle like the jewels they are against it. Great quilt! My small group is doing a batik/black Kona friendship circle quilt for one members upcoming 'significant' birthday. I am inspired to begin now after seeing yours!!
Monday, April 30, 2007 6:20:00 AM