Love, Laughter, and Attention in Abundance 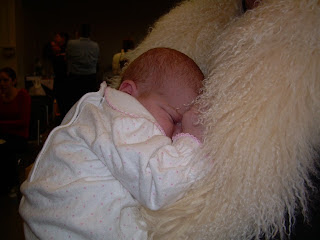 When I served as a hospital chaplain, after a death had occurred and the prayers had been said and the family ministered to and escorted to their cars, I used to go up to the Nursery. I needed to see -- and sometimes hold -- a baby. Occasionally I was fortunate enough to be in the Birthing Area and hear the first cry of a new life coming into the world.
. . . .
And so it was today. The rain Near Philadelphia is torrential, and there are gloomy forecasts of floods in the area. With the funeral of Friday still in my soul, I was not to be deterred from attending the Naming Ceremony for a new baby girl. Russell is a coworker; his wife Shira will graduate from the Rabbinical Seminary next month. This baby is their third child.
. . . .
Natalia Abigail was born on what would have been her maternal grandfather's sixty-second birthday. Her name is in his honor and memory. Natalia means "God has planted for me," and Ned's firm belief that "Love, laughter and attention are not finite goods -- the more you give, the more there is to give" was invoked upon her today. Abigail means "my father's joy." Surely this little girl will bring much joy to her parents, and in their home she will never lack for love, laughter, or attention.
. . . . 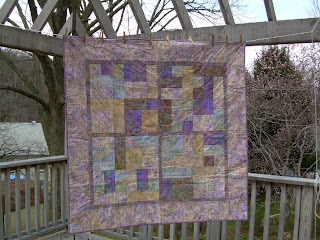 The ceremony was conducted by Shira's colleagues, and was very moving. The singing was in Hebrew and the words "Adonai (Lord)" and "Elohim (God)" were recognizable to me from my brief study of Hebrew. The celebrant blessed Natalia with water -- remembering a story from Scripture that living waters hold a promise of life -- and her grandmothers and great-grandmother washed her feet as part of the recognition and awakening of all of her senses. I thought of how water plays an important role in Christian Baptism, and realized yet again the deep connections we have with our Jewish sisters and brothers.
. . . .
I brought the quilt I had made for Natalia to the ceremony, and was so happy to note that the colors of the napkins and plates were those I had used in the quilt. It was a joy and a blessing to have been able to be a part of this gathering.
Email Post
Labels: Baby Quilts

Mrs. Goodneedle said…
Natalia Abigail was indeed the salve for your grieving spirit... what a blessing, and what a very lovely quilt!
Sunday, April 15, 2007 5:38:00 PM

Leslie said…
Nancy, when I read "Love, laughter and attention are not finite goods -- the more you give, the more there is to give" was invoked upon her today", I had to stop reading and breathe into the moment it was so moving. Thank you for helping set my thoughts above this morning. *hugs*
Monday, April 16, 2007 11:16:00 AM

Nana's Quilts said…
Someone said (in one of the blogs I read - sorry I cannot remember which)that they felt gratitude for x,y and z. And I got to thinking how critical it is for all of us, especially when we have sorrows to face, to truly 'count those blessings' and remember what we have to be thankful for. And we, who can quilt and play on our computers must recognize our bounty.
Thanks.
Marne
Monday, April 16, 2007 4:10:00 PM

Shelina said…
I guess I am behind in reading blogs. In Islam, we use water too. Every new moon, we walk up to the leader, and say a prayer. Then they say their prayers for you while they sprinkle your face three times with holy water.
Friday, April 27, 2007 7:43:00 PM