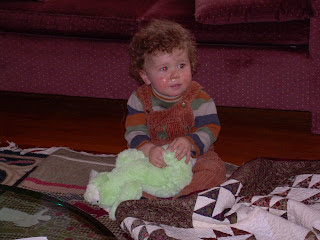 In our family, kids don't generally get bears as their primary stuffed animals. We tend to go in for bunnies, usually given on the first or second Easter. Tom had White Bunny; Sherry had Brown Bunny; and Andrew had Fast Bunny. Last year, Sam was only a couple of months old, and determined not ready for a bunny. This year I found the most incredibly soft bunny for him. He took to it right away, and even let it share his mid-day nap.
. . . .
It was gratifying to see him loving it -- Sherry had said earlier that he hadn't had much use for stuffed animals. Prolly it was because they weren't bunnies . . . .
. . . . 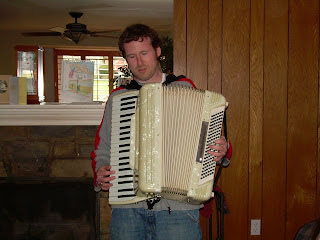 At some point last winter, Tom expressed a desire to learn to play the accordion. I told him that our friend Bill had several and I thought that I had heard that he was looking to sell one (or perhaps that was an expression of wishful thinking on the part of his wife, Linda!). Tom phoned Bill immediately, and within an hour he and Anastasia had gone to visit and Bill had given him one of his accordions! I told Tom of the necessity of learning "Lady of Spain," and was very surprised that he had never heard it! Well, of course, he did not grow up watching "Ed Sullivan" and the "Ted Mack Amateur Hour." When we visited T&A last, Tom was proud to play "Happy Birthday to You" and had begun work on "LOS." He had perfected it by this weekend, and was proud to share it with us as part of his Easter performance! He has several selections in his repertoire by now, all self taught. 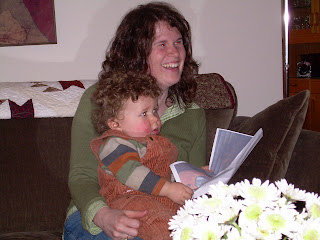 Sam had been lively and all over the place most of the day. When the accordion came out, however, he sat perfectly still on Sherry's lap. We couldn't determine whether the look on his face was utter fascination or terror!
. . . .
After a bit he climbed down and picked up a toy of his own that has a tiny three-key keyboard, and brought it back to his Mom. In time, he approached Uncle Tom and struck some of the keys himself! 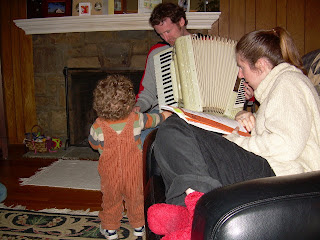 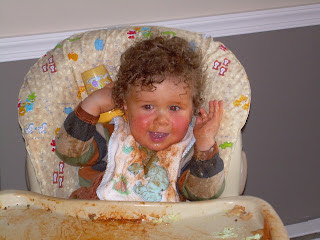 Dinner was roast lamb, parslied potatoes, baby vegetables. Sherry had brought some ravioli for Sam as she didn't think he'd care for the lamb. He did like the ravioli; what he didn't eat he used as tray and self decoration. He was such a good boy for the entire day!
. . . . 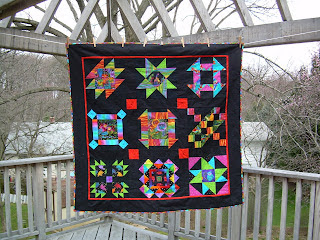 I had finished his quilt the night before. I wanted to tie it, but didn't want the ends of the knots on top. I'd tied another quilt earlier in the week with the knots underneath; when I told Marsha about it, she shared a technique where the tying threads on the top were tiny X's and the knots and loose ends were on the underside. I tried this technique with Sam's quilt and was delighted with the results! The blocks were from a swap from a few years back. It was called "It's A Jungle Out There," and featured Laurel Burch's Jungle Songs fabrics on Kona black. I have a lot of blocks from this swap; this is the first project from them. 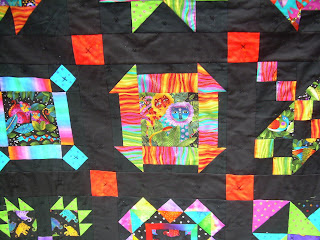 Tanya said…
What a nice bright and colorful quilt! Your family looks content and happy. Was that spaghetti for dinner?
Monday, April 09, 2007 6:28:00 PM

Mrs. Goodneedle said…
Happy Easter one and all! The quilt is wonderfully bright and cleverly knotted (I've never thought of tying like that...!) I know Sam will adore it. I think the whole family will be learning to 'polka' soon! ;)
Monday, April 09, 2007 7:37:00 PM

Ms. Jan said…
LOLOL....Lady of Spain was one of my little sister's accordion specialties! My parents requested it night after night after night. Sam looks like he has used the Benjamin method for eating pasta products....self decoration is the thing!
Tuesday, April 10, 2007 11:08:00 PM