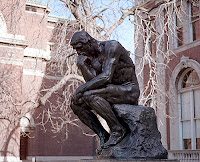 A couple of weeks ago, I first saw the icon for the Thinking Blogger Award appear on a blog that I read. I thought it was kind of a nifty thing: That some committee or some authority was trolling the blogosphere and selecting those worthy of an award. "Way cool," I thought. Then, in the past several days, the TBA is showing up everywhere. (You can see what comes next. I know you can.)
. . . .
Today it showed up in my mailbox. Someone said that my blog makes her think.
. . . .
The receipt of the award made me think. Of course, I was utterly dazzled that my blog makes at least one person think! Wow! Once the flush of pride diminished, I began to think. I have to write very carefully here, for the person who awarded this to me -- while our acquaintance is relatively new -- is someone who commands my respect, my interest, and my affection. And I would not want to offend her. But I'd begun to feel a bit uneasy, and couldn't pinpoint why.
. . . .
So I researched the award and found that it was created precisely two months ago by someone called Ilker Yoldas, a fairly obvious pseudonym. I didn't feel inclined to work out the anagram possibilities, but someone else might. Though he (or she) says his purpose is to recognize blogs that make people think, the award thing-y apparently links right back to his site, so it is more likely a traffic generator for himself. I haven't bothered to look into what his money-making racket on his site is. A perusal of the site/blog reveals someone who (a) has way too much time on his hands, (b) and has a mighty sense of self importance.
. . . .
Besides, the whole thing has a chain-letter feel to it.
. . . .
So I'm not going to feed Ilker's ego by posting his little logo-link.
. . . .
The idea of recognizing blogs that make me think, however, is a splendid one. The blogs I read regularly are listed in my sidebar, and providing links here would be a redundancy. I will mention a few that make me think, though, and in no particular order. If they pique your interest, go to the links in the sidebar.

The first blog I read every day without fail is Mrs. Goodneedle's. Her tagline "Life is Good!" is something I need daily. Some days I'm less aware of this than others, and on those days, Mz. G gives me the boost I need. She writes simply, concisely, and her blog is smart and attractive.

Chez might be viewed as the antithesis of Mz. G. In sum, he's one of the most brilliant writers I've ever stumbled across, and his sentiments more often than not mirror mine (though in far more colorful language!). I'd prefer not to think of how he'd respond to being tagged!

Laurie has been quiet of late. But she's an excellent writer, too, and speaks openly and thoughtfully about day-to-day occurrences in a way that make me think. The soccer thing, well, everyone's entitled to an oddity or two. She makes great quilts and invented the Seattle Streets pattern that is on my to-do list.

And then there's Greg. He writes primarily about two subjects close to my heart -- gay rights and disrespect by the church. He's young, and in time will broaden his focus, but for now I read his pain and hope he finds peace.

Tanya writes of a life that in so many ways is vastly different from my own, and underneath there are the same values, the same themes. She makes me think about choices we make and the implications of those choices.

Frank makes me think most of all. A cyberfriend with a beautiful soul, he sends me his poetry hot off the press, and I find a picture and post it on "our blog."
. . . .
All this thinking about blogs that make me think has me plumb worn out. Think about it, though, which blogs make you think?

Mrs. Goodneedle said…
Thanks you for your kind comments. You know that you always make me think, you bring me smiles and you give me the support I need, when I need it the most, from your generous and loving heart! I am deeply grateful. I, too, find myself unable to give any credibility to self-promoting "awards" and have decided to let that craze/trend die its own death. While flattered to be "tagged" I can't be coaxed into a "now-you-tag-five-others" state of mind just because.
Friday, April 13, 2007 8:29:00 AM