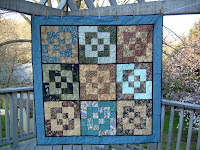 It was a wonderful accident, the way we met. Not that we met, for surely God had a hand in it. I think the way it happened was that Sharon sent out an email to a great long list of people from her address book, and Frank -- god bless him -- hit "reply to all" instead of "reply" when he sent Sharon that first poem. At least that is the way I remember it. He may remember it differently.

. . . .
So anyway, I opened this email from an unfamiliar address. And there was this poem. I've written before that I don't appreciate poetry. Perhaps it is a character weakness; maybe just a matter of personal taste. Don't appreciate opera either. Or scotch. Or pumpkin pie. But back to Frank.
. . . .
The poem was unexpected. It was simple. It was beautiful. And I had no idea why this stranger was sending it to me. I looked through the long list of recipients for a clue and finally found Sharon's email. So I inquired.
. . . .
"He's harmless," she replied. (Oh, he'd be SO offended!) He had been a member of the congregation she had previously served. So I wrote back to tell him how much I liked the poem. And he send me another. And another. And I wrote to tell him what I was quilting. And one day he and his wife came to lunch. And we all got along.
. . . .
I don't know how many years it has been. Six or seven, anyway. Every once in a random while, the flag in my mailbox will bear his name, and I'll know there is another gem for me to read. I've shared them with friends. With family. And it is still about the only poetry that I like.
. . . .
Last summer, after I became a blogger, it occurred to me that this treasure should be shared! So I propositioned my friend, and he agreed -- we'd start a blog together! I never knew whether he really wanted to blog or was just delighted to have been propositioned. Anyway, he'd provide the poems and I'd find illustrations and post them. We've had a wonderful time. I still have a file of poems to post; it is, of course, a matter of finding the time.
. . . . 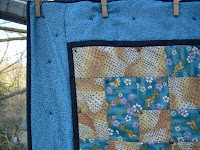 How do you tell someone that he has touched your life? That wasn't hard to figure out. The Bento Box quilt, from the time I started it, seemed destined for him. It is a simple pattern, like his simple poems. It is the right size to go over a lap in a wheel chair, or to take a nap under on a couch. I used Marsha's X-knot technique to tie it.
. . . .
I sent it to him on Saturday. And now it is his turn to find something unexpected in his mailbox.
Email Post
Labels: Friendship Quilts

Tanya said…
Thank you for your comments about Shiori-chan, I'll pass them along to her. She is an excellent student but I did help her some with her compostion. I have a feeling she will go far in the world. Thanks again.
Tuesday, April 24, 2007 7:35:00 PM

LoieJ said…
I don't know how I discovered Frank's blogs. Maybe the link on your blog, I don't know. Anyway, like you, I'm not naturally drawn to poetry, although I was an English major. But I do like the poems of his that I've read. Lately I was too busy to read the ones posted, but I have a link in my "must read" file to follow up on when I get back home.
Tuesday, April 24, 2007 8:08:00 PM

Mrs. Goodneedle said…
It's a grand quilt for a great poet. What a wonderful, happy surprise awaits him!! So, I'm guessing the "tails" from these X's are on the back? I need a course in tying techniques. You are such a terrific friend to share your talents so generously!
Wednesday, April 25, 2007 6:13:00 AM

Unknown said…
LET'S SEE IF I HAVE MY PERSONAL AD RIGHT. " HE'S HARMLESS, EASILY PROPOSITIONED, HUMBLED BY THE GIFT, SENDS MAIL TO STRANGERS, BRINGS ALONG HIS WIFE." THAT SHOULD BRING IN THE MAIL. HAVE YOU JOINED THE CONVENT YET?
Wednesday, April 25, 2007 7:53:00 AM

Nicole said…
What a lovely story about your friendship with Frank. The quilt you are making for him is truly beautiful. What a great memento of your friendship.
Wednesday, April 25, 2007 4:01:00 PM

kdmade said…
What a sweet story! And I'm with you on the subject of poetry...and I live with an English teacher! I'll forgive give you pumpkin pie, too...but if you include sweet potato pie in your list of un-likeables, I shall never get over it!
Thursday, April 26, 2007 3:30:00 PM

Tracey @ozcountryquiltingmum said…
yes, he sounds good to me and I loved the poetry-I could understand it! Tracey
Friday, April 27, 2007 6:02:00 AM

Shelina said…
I'm not much into poetry either, but there are a few good poems I do like. I guess it is just a matter of taste. Your quilt is pretty, and I'm sure it will be much appreciated.
Friday, April 27, 2007 7:30:00 PM