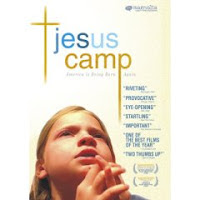 Shelina recently had a post that was titled, "Can we talk about religion?" I wonder if she was reading my mind!
. . . .
On Saturday, Joe and I watched a documentary film called "Jesus Camp." I can't get it out of my mind.
. . . .
It featured a youth pastor from the religious right and most of the film was set in a camp she runs in the summer time. It was about brainwashing. It was about mistreating children -- these kids had the "message" drilled into them, playing with their emotions and their minds, until some of them were reduced to sobbing, to writhing on the floor. And when this happened -- was there mercy? Were there hugs? Was there support? No.
. . . .
This is a religious movement that I have a hunch would be the first to decry our Roman Catholic sisters and brothers for "praying to statues," but they had at one point a bigger-than-life-size cardboard cut-out of George W. Bush, and were asking these children to talk to it, to pledge their support, to issue their supplications. It was horrifying.
. . . .
There were also scenes of homeschooling, which apparently is encouraged by this movement. Kids were taught not only that creationism is right and evolution is wrong, but also that global warming isn't a problem -- continuing the way we are will bring about the rapture!
. . . .
I kept thinking of Jim Jones. And Kool Aid.
Email Post
Labels: Rants

Susan said…
You always knew the world was full of evil, and some of it in the disguise of Christianity.

Patti said…
That is just WAY too, too scary. Especially when one realizes that this type of people are the ones who've determined the course of our nation for the last 7 years.
Monday, April 23, 2007 7:20:00 PM

Ms. Jan said…
We watched an episode of "The American Experience" on Jonestown last night and it was really scary--see Susan's comment. These poor folks thought they had found the answer in Jim Jones and his church. Very sad.
Monday, April 23, 2007 7:40:00 PM

Marla said…
I love reading your blog. You are so thought provoking and insightful. THank you for taking the time to put your thoughts, reflections and observations to paper.
Tuesday, April 24, 2007 4:06:00 PM

debijeanm said…
This is why I love your blog and why it's about the only one I continue to read even when you move into your church and faith stories. Your faith is not mine, but as an American, I celebrate you as you practice and share - every day - your faith. These people are not sharing a cherished belief, they are bullying children to follow a path chosen for them. Where this story gets scarier and scarier is that these kids go to special universities, from there are handpicked into certain corporations which then become their springboards into government.

And there we are. And those same people wage war against radical fundamentalist Muslims as if there is no difference.
Wednesday, April 25, 2007 10:08:00 AM

Greg said…
I saw the film at the Lyric in Blacksburg some time ago. Disturbing to say the least. Extremist groups like Jesus Camp tempt me to give up on religion altogether! Balance. Balance. Balance.

Shelina said…
Oh my, this is scary. It seems like a natural progression of the way things have gone in the political arena, but scary nontheless.