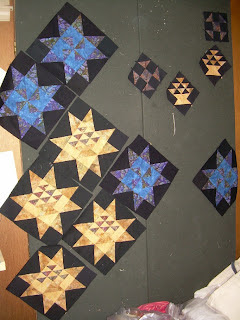 Shelina said…
I like running a swap too, for the same reasons. Although, if I do wait until the last minute, then I tend to look at the swap blocks to see what is missing, so I can make mine to fill in the gap, so that tends to add more pressure on the types of blocks that I can make.

Leslie said…
... paint your palette blue and grey, look out on a summer's day, with eyes that know the poet in my soul...