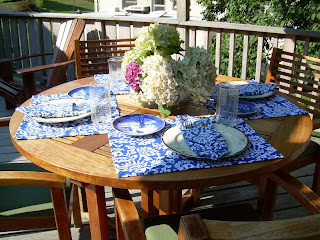 On our fortieth anniversary, Star Flyer gave us a bottle of wine as a gift. It has a picture of a clipper ship on the label. We brought it home to save for a special occasion. Tonight is such an occasion.
. . . .
We met Bob and Sherron a few months after we were married, so we've known them forty years. Usually our couple friendships begin from a woman I meet, but this one started with Joe and Bob's becoming acquainted on the train to Navy boot camp. They hit it off, sent the wives each other's phone number, and a lifetime friendship began. The first few years it was by correspondence as we were sent to different duty stations, and after the Navy discharge, Joe and I moved to the midwest for a long time, while Bob and Sherron settled just the other side of the river into New Jersey. But the geographical distance did nothing to diminish the depth of the relationship -- godparents to each others' eldest child, we've shared weddings and now grandchildren. Sherron is needlewoman; back in the 80s she introduced me to cross-stitch and much later I introduced her to quilting. We have a tendency to give each other fabric and share patterns. We all talk in the kind of shorthand that long-term friends develop.
. . . .
So tonight they are coming to hear about Greece and tell us about their summer and what their grandchildren are doing now. We'll open that bottle of wine and drink to friendship. And we'll laugh and tell stories, some of which we've told many times before.
. . . .
I've had fun today getting ready for this dinner party. The table is set with lovely linens that Tom and Anastasia gave me for Mother's Day -- I've used them before with the blue dishes, but this is the first time with the good china. I bought some shrimps and Greek style appetizers and Sherron is bringing dessert. In between we'll enjoy Joe's good London broil, Louisa's tomato salad and a new potato recipe that sounds promising. If, in fact, it is, I'll post it so you can try it.
. . . .
Bon appetite!
Email Post

CONNIE W said…
Both the long-standing friendship and the bottle of wine are wonderful gifts. How special it will be to enjoy sharing and celebrating.
Sunday, August 12, 2007 8:11:00 AM

Mrs. Goodneedle said…
Lovely table, your guests were sure to feel every bit the cherished friends that you describe. Cheers!
Monday, August 13, 2007 6:18:00 AM