A Weekend in Onset 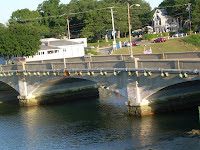 Joe has a small sailboat, and this summer it needed repair. A week or so before we left for Greece, he took it to the place where it was built in Wareham, Massachusetts. This past Friday we left to go pick up the boat and spend the weekend in Onset, the town next to Wareham.

Onset is a small beach community on Buzzard's Bay, just this side of the Bourne Bridge to Cape Cod. You'd say that Onset had passed its prime, except you'd have this niggling feeling that it never quite hit its prime. In addition to the beach, there are a couple of ice cream places (one of which was excellent), a handful of mediocre restaurants, one sweatshirt place and a couple of fudge and saltwater taffy shops. And a superb public restroom. My hunch is that those who live in Onset year-round do a lot of drinking during the long winter season. Why do we even go to Onset, you might reasonably ask. For the sailing, she replied, and for Heartbeat Quilts, more about which in a couple of paragraphs.
On past visits, we've stayed at a very nice inn on Onset Pointe. It was full, however, and after surfing the web for alternatives, I contacted the Harbor Watch Inn, who were filled for the weekend, but offered me the last remaining room at their newly acquired nearby property, the Bridge View (which turned out to be aptly named). We arrived mid-day Friday after picking up Windspirit, having risen at 3 in the morning in order to drive past New York City before rush hour. Our room wasn't quite ready, which was understandable, so we went off to get some lunch and when we returned, it was done. The walk over to the second property was quick, and not to put too fine a point on it, the place was an absolute dive. The room, for which we paid far more than I care to admit, was a third-floor walk-up that pretended to be a suite. Hah! The air conditioner, which functioned minimally and left a trail of water on the floor, was too small for the window and cooled only the kitchen. The sitting room consisted of a set of shelves, a couple of pictures, and a molting wicker loveseat in a space about four feet by four feet, facing the door to the deck. The bedroom had no window, and slanty eaves, and a big box fan. The deck was the feature for the suite; it measured about six feet by eight feet and contained two of those ubiquitous, uncomfortable white plastic chairs and a small table. The view from the deck is pictured above and below.
My mother always told me that if i can't say anything nice, not to say anything at all. She never said that I couldn't tell the whole truth in addition to saying something nice. So I must tell you that the bed was unexpectedly comfortable, the sheets were clean, and the shower, though so tiny that the soap dish had to be erected on the wall outside the stall, had more than adequate water pressure. Beyond that, well . . . .
I can't speak for the main proper of Harbor View Inn, but if you go to Onset, and you probably won't, I can't recommend the place based on our experience. Probably the worst part was that on the second day, no fresh towels were provided. Unconscionable, I think, anywhere, but especially in a beach community in August. I kept remembering the Hotel Xixil in Nebaj where we stayed in Guatemala; it cost two dollars a night and as Dayle was fond of saying, was no bargain! 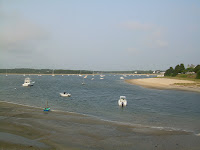 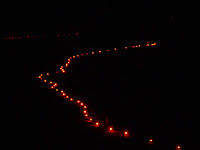 Saturday night, it turns out, was "The Illumination." We had no idea this was to occur, nor did we know what it was when we heard about it. But after dinner we went out to the bay and when we saw what was happening, we hurried to our accommodations because we realized quickly that we had the best view in the area! What had happened, was that flares had been set and lit all around the perimeter of the bay. All of the population of Onset and the surrounding area turned out for the event and I imagine that the ice cream stand made its budget for the year that night. It was quite lovely; my photo doesn't begin to capture it. 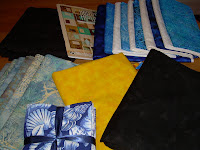 On Saturday, my sainted husband braved the hideous traffic jam across the bridge to Cape Cod on my behalf. Years earlier, Bonnie had told me there was a good fabric shop in Hyannis. And was she ever right. Heartbeat Quilts is probably the best quilt shop I've ever been in, and in honor of the visit, I lifted my moratorium on fabric purchasing!
Click to enlarge, and in the back you'll notice at the left a piece of amazing batik that reminds me of the old "raw umber" color I loved in the Crayola sets (I think the hue has since been retired). Next is a book. Then, you know, having been to Greece I can't get blue and white out of my mind -- Joe picked all of those pieces out and is drawing up a plan for our Greek memories quilt. In the front row, again from the left, are some aquamarine batiks that I had to have, a fat quarter pack of blue and white seaside theme FQs, and the black and yellow are the background and accent fabrics for a Stack and Whack I've wanted to make but hadn't bought the feature fabric for until yesterday. A wee speck of it is visible between the black and the yellow, but that is all I can show because it is to be a Christmas gift for someone who may read this Blog. I also bought the newest Australian Patckwork and Quilting magazine and got two or three really good ideas from it, a FQ pack gift for Honna, and a couple of notions. Not that the economy of Hyannis was in danger, I'm certain, but I certainly did my part!
I dreamed of quilts in my comfy bed in my grungy room last night. Today we had a safe and uneventful trip home. And our travels for the summer have come to an end.
Let the sewing begin!
Email Post
Labels: Other Travel

CONNIE W said…
I found your post about your trip very interesting. Ending up with less than desirable accomodations is really a big disappointment in my book. And it has happened to us a few times. Sounds like you were able to make the best of it and not let it spoil your trip. The photos are nice and I bet the night illumination was an awesome sight in person.
Sunday, August 05, 2007 11:45:00 PM

Mrs. Goodneedle said…
Wonderful and entertaining post, should I make my way to Onset the places to miss have been duly noted. I'd love to see more of that 'wee speck' destined for a S&W... I'll be eagerly awaiting that one. The Greek blues are gorgeous.
Monday, August 06, 2007 10:00:00 AM