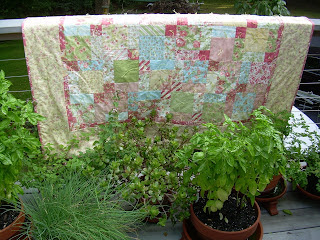 When Diana and Phil's son Noah was born a few years ago, I made him a quilt. Both parents were teaching at our school at that point; Phil has since left to teach in public school, and Diana continues to teach seventh grade social studies. They didn't want Noah to be an only child, but another pregnancy wasn't a good idea for Diana. They decided international adoption was the answer and entered a very lengthy and frustrating process.

At last, just around the time we were leaving for Greece, Diana got the call to go to Guatemala to bring her daughter home! It was just a few days before Sofia's first birthday.

I don't generally make a teacher a quilt for a second baby. But the circumstances here were so special, I just had to. This quilt is a Disappearing Nine Patch made from Moda Faded Memories charm packs and yardage. I haven't quite finished trimming the knots, but I thought by the time I did, it would be too dark to take the picture.

Format Note: The Love of My Life has asked me to return to the format of photos on the left at the start of paragraphs. He so seldom asks anything of me, I'm happy to oblige, though I had begun to like the experimental format!
Email Post
Labels: Baby Quilts

DPUTiger said…
I prefer the "photos on left side" format as well, but I tend to have really ugly text breaks when I try to do that. Somehow, yours always look better than mine do on the left. :)
Friday, August 24, 2007 6:00:00 PM

The Naturalist's Daughter said…
The quilt is gorgeous. The colours are so soft and lovely. I hope all goes well for your friends and Sofia
Saturday, August 25, 2007 2:23:00 AM