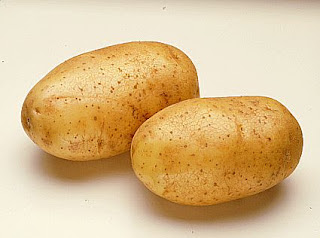 Were they ever yummy! I looked around Google for a picture (ours having been devoured last night) and the pictures show something that resembles mashed rather than smashed potatoes. So I chose this picture of baking potatoes because that is how you start. You'll also need some olive oil, salt, some sour cream, and some chives. And that is it.
. . . .
Start by baking the potatoes in a 400 degree oven for one hour. Just like that. No foil, no oil, no fuss, no muss, no bother. For four people, allow six potatoes because the men will want more! Let them cool a little bit. You can do this part a couple of hours ahead of time. Oil two baking sheets. When the potatoes can be handled, slice them in half lengthwise and one at a time do this: Place the potato half on the baking sheet, skin side down. Put a little bit of oil on the bottom of a sturdy glass and smash the potato half. When you have finished doing this, brush each potato half with some olive oil and sprinkle with salt and pepper. At this point, I covered the baking sheets with foil and set them aside.
. . . .
Forty minutes before dinner, having the oven once again at 400 degrees, remove the foil and put the baking sheets in the oven for twenty minutes. When the timer rings, remove the baking sheets, and one-by-one, carefully turn the potatoes over. Put them all back in the oven for another twenty minutes.
. . . .
Meanwhile, cut up some fresh chives and put some sour cream in a pretty dish. You can combine the chives and the sour cream, or you can serve them separately.
. . . .
At serving time, turn the potatoes onto the serving platter with the skin side down and pass along with the sour cream, the chives, and additional salt to taste.
. . . .
They are scrumptions -- remind you of "baked" potato skins that you get in restaurants, but without the deep frying. Kind of a cousin to latkes. Downright delicious, if you get my meaning.
Email Post
Labels: Food

Quiltgranny said…
I always wondered what the difference was between smashed and mashed? I thought it was just the pronunciation lol! Will try this tomorrow night with son coming for dinner!
Sunday, August 12, 2007 11:44:00 AM

CONNIE W said…
These sound great. One of my favorite restaurants serves up twice-baked potatoes which are scrumptious. They mash the inner part which is scraped out, mix with sour cream, chives, bacon, and add it back into the shell, re-bake (now they top with cheese but I prefer it left without the cheese). Wishing I had one right now.
Sunday, August 12, 2007 2:12:00 PM

bettsylyn (Lynda) said…
We got our "recipe" from an Australian cooking show a few years ago. We boil the potatoes first, (usually smallish sized potatoes) and then smash the whole potato. From there they go into the deep fryer,to crisp them up. I love them with avocado or guacamole. Definately a family favorite, and I recommend which ever way they are made. It is interesting that similar things turn up all over the world.
Sunday, August 12, 2007 5:31:00 PM

Unknown said…
I will have to try these (well I will give my daughter the recipe for her to try, she is the new cook around here). Sounds scrumptious.
Sunday, August 12, 2007 7:41:00 PM

Anonymous said…
mmmmmm, and here I thought I would read about quilts! I was reading A Peach in Stitches and saw your smashed potates story, could not resist visiting your blog. Thanks for sharing.
Wednesday, August 22, 2007 11:06:00 AM