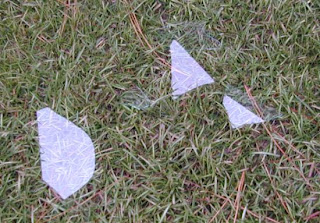 The high school is at the end of our block. There are people who don't like living near a school; they don't like the noise, they say. In my opinion, there's bad noise and good noise, and football games and band practice fall into the latter category.

During the school year, in the mornings there is about a half-hour of traffic as a steady stream of student drivers and parents delivering students go to the school. A handful of buses, too. And the walkers, in ones, twos, and threes, pass by on their way to school. The same happens for about a half-hour in the afternoon. We've never been bothered by living near a school.

Until last spring. We have a lightpost on the edge of our front lawn, right next to the sidewalk. There is a pile of stones around the lightpost. We used to have flowers there instead of stones but (a) the newspaper deliveryman used them for target practice when tossing the paper out of his car window and (b) the neighborhood dogs pretty much finished off whatever he left by peeing on them. So we went to the pile of apple-sized stones.

One day last spring I came home to find that one of the four glass panels in the lightpost had been broken. The glass was in the fixture and on the stones below. A few days later a second panel was broken. At that point we removed the remaining panels and the bulb until after school let out for the summer. During the summer I had new panels made and we installed them and all has been well.

Until today. School has been in session for approximately two weeks, and I came home to find a broken glass panel.

The strange thing is, it didn't make me angry. It made me sad. I was an impulsive and self-centered young teenager at one point and did some things I shouldn't have. I didn't think or care about the impact of those things on other people. So I suppose it is a case of "what goes around comes around."

It took time and money to get those new glass panels. It took effort on my husband's part to make the lightpost look presentable and be functional again. And it felt crummy that someone had done this to us. We'd say to each other, "We have an enemy." And now, here we go again.

We imagine that they are using our own stones to damage our property. Probably this evening we'll go out and gather up the stones and leave the bare dirt there around the base of the lightpost. And see what happens. And, if the kid or kids are resourceful enough to find stones someplace else and break one more panel, I suppose we'll dismantle the lightpost completely.

I just can't imagine that the fun somebody is having doing this is anywhere near the amount of unhappiness that he's causing.

Kristina said…
gross gross gross. I have had things like this happen (egg smooshed through a sunroof that I left cracked overnight, car keyed, etc) and it ALWAYS feels crummy and you NEVER get to the bottom of it. I would feel very sad if the light post came down. What about plexiglass? Just to make them stop bothering? So stinky:(:(:(
Friday, September 18, 2009 6:21:00 PM

Tanya said…
You don't think going to the school would do any good? That's the typical Japanese way and I don't think it is a particularly great way but that is the first thing that comes to my mind... Too bad you can't print out your blog post and leave it for the vandals to learn a lesson about othe people's feelings.
Friday, September 18, 2009 7:09:00 PM

blushing rose said…
I was going to mention plexiglass but I see Kristina offered this idea. Where are the parents of kids nowadays.

Call their bluff & tell them the house is now video camera covered & put a fake sticker in your door or window.

Best of luck. We've had our share of naughty children do these things to us, also. Very annoying.

Unknown said…
Yes! It is difficult to maintain property in Philly! There are so many people (young and old) who are leading very destructive lives...I pray for them. Meanwhile, I agree with the plexiglass idea.
hugz,Pam
Friday, September 18, 2009 9:46:00 PM

Salem Stitcher said…
How sad. You have to wonder if maybe one day when that child has property of their own if he or she will think about breaking your lamp and wish they could take it back.

I never have understood the joy people get from destroying someone else's property.

*karendianne. said…
Your posts shows you true compassion. You deftly show your knowledge and understanding of the Youth in our society and what they're up against. While this is indeed a bummer, I have respect for your ability to #1 - manage the situation thus far and #2- understand the plight of others.

Mrs. Goodneedle said…
This makes me sad, too; both incredibly sad and mad at the same time! How about a return to planting around the base of the post, thus removing the "ammo"? It seems a shame to take the lamp down altogether.
Saturday, September 19, 2009 10:00:00 AM

Barb said…
Oh Nancy, I am so sorry about this continued happening. You and I both know that there are more GOOD kids then *not so good*...but when this keeps happening it just makes us feel SAD and ANNOYED!! I know because I work in a school office, lots of times the problem is generated because of a home issue, the kids are sometimes screaming for attention anyway they can get it :<(! Will the "plexiglass" work, because weather can cause that to become brittle? I hope you don't need to remove the fixture entirely, but I do understand the frustration! Good luck with your decision, I like the idea of plantings around the base too!
Saturday, September 19, 2009 11:52:00 AM

Anonymous said…
I think everyone is a little lost these days. I had an older man, probably in his mid 70's, grab a rotisserie chicken out of my cart the other day at the grocery store, and laughed about it. I had just set it in and he was looking at the remaining chickens and apparently they weren't what he wanted so he took mine. I just stared and his wife said well we were looking for that flavor......

There are really no easy answers to teaching manners and respect for people of any age.

I don't think it happens more with today's youth it's just that there are more people so there are more less respectful people. Odds are this kid is perfectly normal with no problems what so ever, breaking it because he/she can, because he's/she's broken things his/her entire life and always had a replacement handy.

I think it goes back to growing up with too much, too often, too available.

Micki said…
You got some good suggestions there from the ladies. Good luck with it. I am sorry, as I can see how frustrated you are.
Micki
Sunday, September 20, 2009 11:43:00 AM

LizA. said…
That's just not fun. But, how about getting some plexiglass replacements. You can buy sheets at Home Depot and it's easy to cut. My DH makes me quilting templates out of it all the time.
Sunday, September 20, 2009 1:55:00 PM