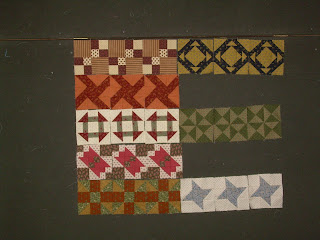 When Cecelia saw Sherron and me perusing The Farmer's Wife that first night at White Oak, she was interested.  Too interested.  The second night she pulled out an hours-old copy of her very own.  Further evidence that the economy of Lancaster County is intact.

Sherron and I had decided that we'd each choose ten blocks, make two of each and trade them.  Guess who wanted in!

So each of us chose ten blocks to make three of.  Obviously we began with non-template-using blocks.  I'm 8/10ths done my commitment and amd finding the process relatively addictive.  Right now I've got the pieces for The Farmer's Daughter block cut and have begun to assemble it.  I'm hoping to have my blocks in the mail to Cecelia and Sherron by mid-week.

Unbeknownst to us, Pat was watching with interest.  Her copy from Amazon should be at her house within another day or two.  Wonder if she would like to swap ten blocks with me?  Oh, Sherron, what have you begun!

Pat said…
Evil! You White Oaks folks are evil. First you suck me into doing the wooly bully in my pajamas, then you force me to buy tons of fabric from the Amish, and now this. Sheesh.
Sunday, March 14, 2010 2:01:00 PM