Dinosaurs and Other Creatures 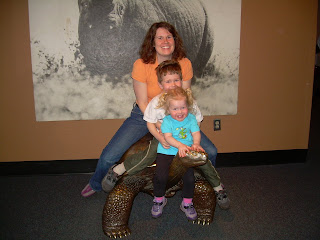 On Saturday, my son-in-law had a school obligation (he's a public high school history teacher) and Sherry wanted to take the kids to the museum.  Sam had been learning about dinosaurs in his day care class, and we've been mightily impressed with his knowledge and the precision with which he speaks of them.  He knows which are meat eaters and which are plant eaters.  He's only four, but I half expected him to tell me that some were omnivores!

Anyway, Joe and I accompanied them downtown to museum where we were dazzled by the dinosaur bones.  The dioramas were precisely as I remembered them, and the last time I saw them was probably in 1952.  Some things never change.  They don't have to.

Upstairs there was a section of live animals, animals that really should live out in the wild but for one reason or another, were inside.  We saw fox, coatimundi, bunny, iguana, and some truly outrageous parrots, among other things.  While Sam was smitten with the dinos, I think the live animals were Caroline's favorite part.  It was a delightful day with some delightful people.

Judi said…
What a gorgeous picture! It sounds like everyone had a very happy day.

What a gift our families are!

Mrs. Goodneedle said…
Oh my, how they've grown! Precious, simply precious memories in the making, so glad you went along...