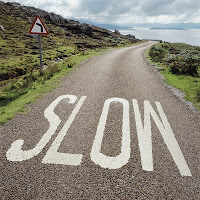 Things are a little slow here right now.  It is one of those weeks that I don't like very much -- one where I have something I have to do each night.  As a rule, I like to be out no more than two nights during a week.  But this week, that's not the case.  So I'm sort of just moving from one day to the next, one commitment to the next, and anticipating the weekend where there is very little on the schedule.

Besides the overscheduled feeling, I've got two people very much on my mind and in my prayers this week.  One is the dear woman who asked me to sell Melanie Wilkes to her -- on Friday night, coming out of a restaurant with her family, she fell and broke her hip.  She's had surgery and is doing well, recovering in hospital, anticipating rehab, and is expected to make a full recovery.  Still.

The other is the grandson of another dear blogless friend whose young grandson had a medical emergency of a mysterious nature this week.  He was rushed to hospital and stabilized, is undergoing tests and seeing specialists.  Terribly scary.

Going, worrying, hostessing, fretting.  That's my week.  So I'm anticipating the weekend.  When I'll have a chance to just be.

Annemiek said…
..only 2 more days 'till saturday!
so hang in there!
Sometimes all bad things happen at once, but remember: "this too shall pass" (my motto for hectic days and i keep it in mind when there's joy so I ENjoy it full!)
Wednesday, March 17, 2010 12:55:00 PM

antique quilter said…
things will get better, thank goodness the little boy is in the hospital getting the care he needs.
I hope things slow down for you
I am the same way too many days out in a row just throws me off.
its only 2 more days to the weekend.
Wednesday, March 17, 2010 3:02:00 PM

Tanya said…
I am so trying to get out of the worry mode... I have to make a conscientious effort! Talk about uncluttering one thoughts of unnecessary junk... Hope your week winds down quietly and you can enjoy the weekend. I'm looking forward to spring break!
Wednesday, March 17, 2010 8:32:00 PM

dianne said…
i THOUGHT that Kent Kapers II might be the woman who fell in love with your Miss Mellie ... i hope that she can wrap herself up in the loving arms of all of the quilters who made blocks for the quilt and ... heal.
Sunday, March 21, 2010 12:10:00 AM