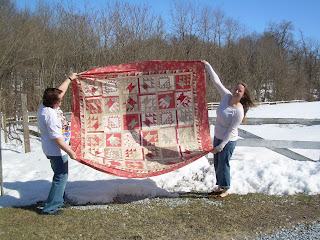 As soon as the tables were cleared and the power strips, cutting tables, and ironing boards were set up, I got right to work on "Going Rouge."  Earlier in the week I'd cut a bazillion 2-7/8 squares and drawn the diagonal line on half of them.  I started by sewing on both sides, then cutting, then pressing and then putting them together in long strips of 33 each.

Never having been any good at math, I cut twice as many squares as I needed, forgetting that each square pair would yield two HSTs.  I got the four strips of the HSTs together before going to bed that night.  On Saturday morning I sewed them to the sides and the ends, and then took out the gorgeous large floral that Sherry had so thoughtfully given for my birthday and used it to make the final outer border.  I wanted to drape it on the fence outside for its photo op, but the wind was too strong so Honna and Turbo came and helped me get a picture.  I think you can click on it to enlarge, if so inclined.  A more formal portrait will be provided someday when the weather is decent Near Philadelphia. 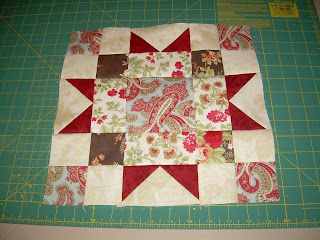 I'd brought along the makings for the most recent block in the Fat Quarter Shop BOM that I swore I was going to keep up-to-date on. And I have, actually.  I've managed to get each month's block completed before the next month's arrives.  There's a kit for the center, but that is another story.  I'm not partial to this particlar block, but it will be fine when in a quilt with the other eleven.  I think this is block number nine or ten, so we're moving right along and I'm not going to be able to put off that center thing too much longer.  This block hardly took any time to make. 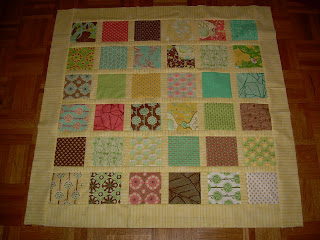 Well, you know any trip to Lancaster County isn't totally satisfying without some retail therapy.  Right after lunch on Saturday Honna, Helen and I drove up to Bird-in-Hand and paid a visit to the Log Cabin Quilt Shop, a place I've praised on this blog before.  They have the nicest FQ packs; they put them together themselves, and aren't afraid to mix lines and manufacturers, creating really, really nice FQ packs.  I didn't buy any this time (I still have one or two from a previous indulgence) but I did pick up a yard of Rouenneries for binding Going Rouge when she's quilted and also a cute little charm pack.  Or two.

A&A's good friends are expecting a first baby in August, and dear Carol's son and his wife are expecting their first in June.  I thought the charm pack would make a sweet little non-gender-specific quilt and was looking around for some nice white when that terrific yellow stripe caught my eye, and my afternoon's project was selected!  After a short nap I started cutting lattice and this top was finished before dinner. 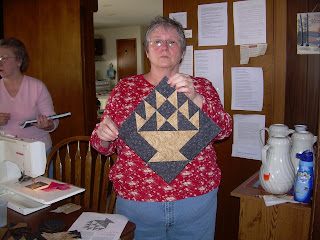 I mentioned in the previous post about the basket swap some of us are doing where we're using only indigo and caramel fabrics to make a dozen different baskets.  Helen and Pat were making splendid progress on theirs, so I spent most of Saturday evening cutting all of the pieces for mine.  When I got up Sunday morning I thought I'd start putting them together and see how far I got.

I tell you, this was one of those situations where anything that could go wrong did.  I was totally fed up by the time I got one lonely, measly block finished and dreaded the thoughts of the remaining eleven.  People were supportive and encouraging and reminded me that the rest would go together much more cooperatively.  I've not put that prediction to the test yet.

Unknown said…
GOING ROUGE! is FABULOUS! I can hardly wait to see it quilted!

Kimberly Mason said…
That is the FIRST quilt I have seen made from those fabrics that I have actually LIKED! Very impressive indeed! In fact, I'm almost inspired to sew again (almost...not quite...working on it, though! Hopefully someday soon!)
Tuesday, March 09, 2010 12:13:00 AM

wordmama said…
I love Going Rouge more each time I see it. I even picked up some FQ from the line to mess around with. I really love the yellow baby quilt. I think you had a pretty productive weekend. Looks like fun!
Tuesday, March 09, 2010 6:52:00 AM

Mrs. Goodneedle said…
I just love, love, love your Going Rouge flimsy. Nancy, a bazzilion HST's are a LOT, it's no wonder you had too many!! I am inspired by the Caramel/Indigo combination... oh, those blocks will be stunning in a quilt. Well done, you... the baby quilt is simply wonderful too.
Tuesday, March 09, 2010 7:51:00 AM

Pat said…
If you think Rouge looks good in the pictures, you should see her in person. She will be even more beautiful when she grows out of her flimsyhood and into a gen-yooo-whine quilt. We were all rouge with envy.

Correction: Pat did NOT make splendid progress on her swap blocks. She spent Friday night cutting and much of Saturday sewing (when she wasn't helping the local fabric ecomony). Sunday night was spent unsewing all 12 of the blocks that she discovered she had sewn incorrectly. Fellow retreaters learned that Pat can have quite a colorful vocabulary when faced with ripping apart 12 baskets. Nancy, on the other hand, displayed grace under pressure.
Tuesday, March 09, 2010 11:58:00 AM

Lori said…
Other then the block that gave you fits you got a lot accomplished!! I love the colors you've been using- so soft and springy!
Wednesday, March 10, 2010 9:09:00 AM

Susan said…
Thanks for sharing all the pictures. Going Rouge is terrific! I've enjoyed watching this project come together. Sounds like a productive weekend in spite of the basket block.
Sunday, March 14, 2010 10:11:00 AM