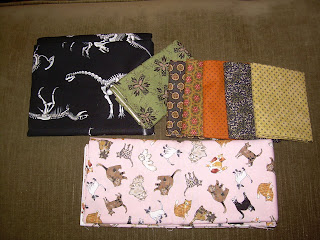 I spent yesterday attending the AQS show in Lancaster, the new event that is replacing the Rita Barber extravaganza that we've become familiar with.  Here, in no particular order, are my comments on the day:

And that's the news from AQS Lancaster!

Pat said…
In the past, I've gone to the Lancaster show as my personal "vacation". My husband goes fishing with his buddies every year, so the Lancaster show was my fishing trip. I'd go for the duration & take classes. When the news of the switch came out & the list of classes appeared, there was nothing that moved me. At all. And all of the classes were half-day classes. If I'm going to take a class & schlep my machine, I want a full day.

Of course a special quilting retreat has provided the "vacation" piece, and has provided the opportunity to bond with quilty friends. The side trips to the local shops have provided all I need in the way of fabric bargains.

Thanks for going to the new show, Nance, and giving an unbiased review. Your mention of the bazillion attendees really nailed it for me, claustrophobe that I am. Maybe next year, or the next. Maybe. If I feel the need to go to a show, I'll prolly (grin) opt for the one in Oaks. Much closer.
Saturday, March 27, 2010 8:56:00 AM

Susan said…
Enjoyed your review of the show. I had a nice day there on Thursday, thanks to the company of two friends. But I agree about the bazillion people and the small booths (although I understand there were not as many people on Wednesday). On Thursday, there were some strollers in the hall and one lady was letting her child push it--right onto my foot! And I also agree about the quilts and wondered, as you did whether the more traditional ones were at the other location. We ate in the lobby of the Marriott and could barely find a place to sit down. And the lines for the shuttle buses were long.

Still, I managed to make a number of purchases, and pick up business cards for those things I might want to consider later.

Will I go next year? It depends. I want to try Quilt Odyssey this summer in Hershey since I've never been. If that show is good, maybe I'll make that my annual jaunt. Parking is free and right next to the venue and there's all that chocolate.
Saturday, March 27, 2010 9:12:00 AM

Nancy said…
What a great review of the quilt show. You need to send the link to AQS... they need to know.

Mrs. Goodneedle said…
Glad you had the experience and, for the record, I understand precisely what you're saying about machine quilting the daylight out of the quilts on display. I felt the same way after being at Mid-Atlantic... almost like it was a contest to see who could use the most thread! ;)
Saturday, March 27, 2010 12:55:00 PM

Barb said…
Thank you for your report, I had hoped that the Lancaster Show would pull together, but I guess not! For years that was my show of choice, and it became more disjointed and seemed poorly organized to me! I too would miss seeing "Itch to Stitch" in their vendor spot!

I have for the past several years attended the Quilt Odyssey Show in Hershey, I truly enjoy everything about that show. Missy and her helpers have it very well organized, and the vendors are nicely placed. I am glad I made the change, and it appears it is a good change for me! I take classes, I shop the vendors, I love it all at Quilt Odyssey! Have a great weekend!
Saturday, March 27, 2010 2:27:00 PM

Pat said…
I spoke with Gina Gempeshaw at Country Quiltworks today. She went to Lancaster on Wednesday. That must have been the day to go; she said it was not crowded. I think the place you did not get to, Nancy, was where the bed quilts were displayed. Gina said they were there, but the dispays in general were thin. She also agreed that there were a lot of thematic displays and not many diplays with quilts someone might actually use on a bed. She attributed the lack of depth in quilts and the derth of quality classes to AQS having to mount this show in a relatively short period of time. She also said that the old Blossom Quilt Show, which is across the street from the Country Host,it now a part of the AQS show, even though it remains at the funky little motel. Some of the dealers who were originally at Blossom were "asked" to move to the main Convention Center & did. They were placed on the 3rd floor of the convention center & as a result were not seeing as much action. Again, Gina went on Wednesday so that might have changed.

Anya said…
I'm still too tired to blog about the show myself.

Salem Stitcher said…
Sounds a lot like the Mid-Atlantic Quilt Festival before they moved it from Williamsburg to Hampton. Crowded, cramped and a confusing layout for those new to the show. I had fleeting thoughts of adding the Lancaster show to my road trips. I may wait a couple of years and let them get the kinks worked out. Thanks for the intel!
Saturday, March 27, 2010 10:20:00 PM

Judi said…
Thanks so much for your report on the show, Nancy. I suppose everyone should take heart that there were crowds - no fun for attendees, but a comfort for oranisers and vendors!

carole ann said…
Nancy I could not agree with you more, I had never been to the show before and was not very impressed. It was more a vender show than a quilt show. Also I did not do my homework very well because I did not know there were quilts anywhere else. I cannot make Hershey this year but will next year. I did enjoy what quilts I did see, there were amazing, just not what I was expecting. Thanks for the report.
Monday, March 29, 2010 8:11:00 AM

Mary said…
I look forward to the Lancaster show all winter. I'm a Chester County girl so I don't drive far to get there. I was glad I did not take my Mother with me this year, she never would have been able to get around. I did not realize that the show was in 3 different locations. My favorite vendor is Bonnie Blue and I had a heck of a time finding her booth.
I was told by one of the Amish ladies who work at Zooks that AQS signed a 3 year contract with the convention center. Hope not. I did sent AQS a email expressing my displeasure in the show this year. I hope more people will do the same. Mancuso puts on a show in Oaks Pa
in Sept I went last year and it was nice. Thanks for your review of the show. I'm glad to know I'm not the only one who was not all that impressed.
Mary
Thursday, April 01, 2010 8:45:00 PM