The Return of the COW* 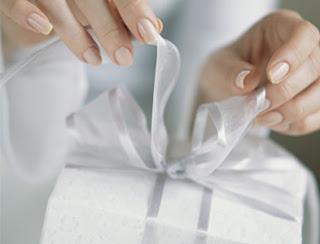 In July, we received an invitation to attend a friend's daughter's wedding.  The wedding was on Labor Day weekend, would have involved a twelve-hour car ride each way, two nights in a hotel, and not knowing anyone at the wedding except the friend.

We stayed home and sent a gift from the registries that accompanied the invitation.

The wedding did come off -- I saw photos galore posted on Facebook.  But I never heard from the bride.

A few weeks ago, I finally sent her a message on Facebook, asking if the gift had been received, saying that if it had not, I would have to deal with the department store and my credit card company.

After a week or so, I sent a duplicate Facebook message.

Today I received a response:

Sorry for not replying earlier!! Forgive me!! It did come! We appreciate the thought even though you were unable to join us! Thank you Nancy! Thank Joe for us too!

Moooooo.  COW* here.  Sure, honey, you're forgiven.  But don't go sending me a baby announcement.

Nancy said…
Emily Post declares that a bride has up to a year to get out her Thank You notes. That is a crock of poop.. and there is no excuse. And what kind of Thank you is that? Kind of a backhanded slap..for not showing...you didn't have to do anything!! sheesh...ok off the soapbox and back to cooking homemade veggie soup and if I were closer I would bring you some for your nasty cold...
Monday, December 13, 2010 11:03:00 AM

Three Birds Inspired said…
"Moo" away! There is no excuse for not sending out thank you notes for wedding gifts. The updated version of Emily Post (Peggy Post) states that you have 3 months in which to send a thank you note. The reply and backhanded thank you on Facebook was rude. Thank goodness my sons know better!
Monday, December 13, 2010 11:27:00 AM

Nicole said…
I sent a quilt that was really special to me to my niece. You may have seen me post on it on my blog. I never heard a word from her. Finally after almost four weeks, I emailed her to ask if it had arrived, as I would be just sick if it had gotten lost. She wrote back "Oh yes, it came. Didn't I tell you? We put it on the bed in the guest room". Her lack of reaction was hugely disappointing to me.
Monday, December 13, 2010 11:36:00 AM

Nancy said…
Mind if I join the herd?

I sent a wedding gift in August and still haven't received acknowledgement. I refuse to contact the couple and have definitely scratched them off of my list.

LoieJ said…
I was especially miffed when my cousin didn't acknowledge my gift after her 2nd wedding. It was a hand made gift. About half way though that summer, I had gotten an email from her in anther context telling about how busy they were. Well, I knew that when fall came and they were both back at school (teacher and principal) things would only get worse, so I knew that the acknowledgment wouldn't happen. How rude. And I know she got it because I hand carried it to the reception.
Monday, December 13, 2010 12:17:00 PM

I'm so very fortunate that my daughter is so quick to acknowledge gifts. Her thank you notes are always promptly done.

Belva said…
Good thing you didn't make a quilt for them. I once send a very expensive wedding gift to a cousin (her mother has been wonderful to me) and never received a thank you. I didn't bother when she had babies.
Monday, December 13, 2010 3:04:00 PM

Susan said…
Funny you should post this today. I sent a gift to the daughter of a high school friend for her wedding in October. Today, I received the "thank-you"--a photo of the couple with "Thank you for the gift" printed at the bottom. Nothing personal and I sort of wondered why they even bothered.
Monday, December 13, 2010 6:19:00 PM

Anonymous said…
Nancy,
I think you have struck a note with many of us. I think writing thank you notes has gone the way of the dinosaur and shame on us for letting that happen. I, too, have sent many gifts, some of them quilts, then never hearing a word. Those people do not get any more gifts from me. Rant on, sistah!
Kathy B
Yolo, CA
Monday, December 13, 2010 7:11:00 PM

Paula, the quilter said…
Can I join the herd? I have stopped giving to certain people because the thank yous never come. I get hints that a quilt or socks would be appreciated for the baby, but when there was no acknowledgment of either when they were gifted to the parents, then why bother? *Moo
I gift to charity now.
Monday, December 13, 2010 9:22:00 PM

Anonymous said…
I love your blog! I’ve included it on a site I’ve created, which is a compilation of some of the best blogs in the city.

Deb said…
I have to get my two cents in...would totally agree with everyone here. I've found that people who don't make quilts, have no idea how expensive and time consuming they are to make, so have no respect for their value. I also don't give further gifts for babies or other reasons to those that can't send a thank you. I've become very selective in who gets a quilt from me!
Tuesday, December 14, 2010 7:19:00 AM

Anonymous said…
Count me in on your herd of COWs. Not only do I not get a thank you card or email, I don't even get the invitation in the first place. My name is included on my mother's invite. I haven't lived at my parent's home for 40 years and have owned my home for over 20 years. Since I've never been married, I guess I don't count. Thanks for sharing, and letting me vent on this subject.
cindy
Tuesday, December 14, 2010 9:40:00 AM

Quiltdivajulie said…
AMEN and AMEN ... a group of 5 co-workers here pooled our cash and bought a significant figured gift card for another co-worker's daughter's wedding in July. To date, NONE of us have received any acknowledgement whatsoever that the card was received. Unfortunately for our co-worker, none of her other children will receive anything from any of us (and we know she taught them how, because she is one of the most gracious ladies I know).

Anonymous said…
I agree - I, too start crossing people off the list that do not say thank you or acknowledge my gifts or special events in my life. I have a grandchild that this year has not done either (I celebrated the big 70!!! I have made quilts for the family this year and if no response, he/she will be dealt with accordingly from now on and I will let him/her know why - it will not be pleasant. Love and Merry Christmas to all in blogsville. Your CA Cuz
Tuesday, December 14, 2010 1:51:00 PM

Annie said…
Did you notice that her reply didn't mention specifically what the gift you gave her was? A-a-r-g-h! I made a wall hanging for my nephew as a wedding gift and also attended the wedding. It was almost a year before I received a non-specific thank you note for the gift. I don't know what happened, but the couple separated about a year later.
Thursday, December 16, 2010 7:29:00 PM

Louise said…
Not getting an acknowledgment seems to be the norm these days. I always give checks now...at least I know through my statement that these were received.
I'm just decided to be pleasantly surprised if I get a "thank you".
Friday, December 17, 2010 2:33:00 AM

Denise in PA said…
I have to join in. I think it might be the generation. My son and DILs' friends are in the getting married/having babies stage. All near or just over 30. They all know I quilt and exclaim how much they'd love one. The quit I made last year for one friend was apparently very well received according to DIL, they show everyone when guests come to their home, etc. After 4 or 5 months I got a preprinted generic "thank you for the gift" note. And I've seen her quite a few times since - not even a mention. Same thing with the "green" quilt I gave to a new bride & groom in September that I sweated bullets over. I heard they love it, but not a mention when I've seen them and not even a note. Bah humbug!
Saturday, December 18, 2010 8:06:00 AM