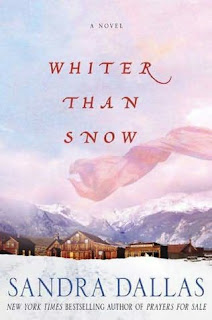 Awhile back, Paula had a giveaway and I was the winner.  Her giveaway was this book, Whiter Than Snow by Sandra Dallas, an author new to me.

When the book came, Joe was between reads, so he grabbed it and read it before I got to it.  When he was done, I was in the midst of a 900-page tome (oh, my wrists!) and just this past week got to read Whiter Than Snow.

It is a gentle book about an avalanche, which sounds like a contradiction in terms.  Each chapter is almost like a short story, as we are introduced to one character's story after another.  I liked it.

When I signed up for Paula's giveaway, I promised to give this book away after reading it.  So now it is time to do that.  If you want the book, leave me a comment, and I'll draw a name.  I think it would be nifty if you'd also promise to give it away when finished.  But that isn't mandatory.

wordmama said…
I have this one on my list, too. I'll be happy to pass it on to someone else, too.

Maureen said…
I read her novel The Persian Pickle Club several years ago and loved it. Will definitely pass it on if I win. Thanks.
Friday, December 31, 2010 9:12:00 AM

QuiltingFitzy said…
I've read almost everything Ms. Dallas has written...except THIS one (hint, hint!) Sign me up!

altar ego said…
I don't know how I managed to miss a whole week of blog posts, but glory, girl, you've been busy! I don't read nearly enough, so as much as I would like to take part in your giveaway it would be eons before I read it. I do like the description of a gentle story of an avalanche. I catch your drift!

mtrquilts said…
Thanks for the opportunity to read this book. I am familiar with Sandra Dallas as co-author of "The Quilt That Walked to Golden". My tradition, when passing along books, is to put name and date read inside the cover, and ask each reader to do the same. It's fun to see who has read the book before I received it. Sometimes a book even comes back to me. What fun!
Friday, December 31, 2010 11:35:00 AM

Linda said…
What a terrific idea to give away a book and keep giving it away. I like this. Please, add me to the drawing.
Linda in Southern Illinois
http://lequilts.blogspot.com/
Friday, December 31, 2010 12:15:00 PM

Anonymous said…
I would love to read it and will definitely pass it on. I belong to several groups that pass books along. We do not have a "club" where we read the same book and discuss it because of physical distance to each other. Please count me in. Your CA cuz
Friday, December 31, 2010 2:30:00 PM

Susan said…
I've read nearly everything by Sandra Dallas, but not this one. I have a quilting and reading buddy who would probably also enjoy this, so I definitely have someone to pass it on to.
Friday, December 31, 2010 5:39:00 PM

Lynda Halliger Otvos (Lynda M O) said…
Reading sustains me, I love real-life adventure tales and this fits that bill perfectly. Passing books on when I finish them has been a way of life since I was a child-I promise to keep it intact !~! Thanks for hosting.
Sunday, January 02, 2011 12:32:00 AM