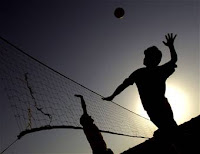 One of the terrific things about working at an independent school is the freedom to attend events.  Each year I wander over to the Lower School holiday program, check in on the 8th grade independent study display, go to a marvelous classical music concert with guest musicians from Curtis Institute, and pick and choose among other assembly programs.  Today was something new:  The faculty vs. student volleyball game.  A blanket invitation went out to all faculty and staff; people were needed for the team.  I did not volunteer.  It may not surprise you to hear that sports and athletics never have been my particular thing.

But I went over to spectate, and an equally clumsy coworker said to me, "I can't remember the last time I played volleyball.  Can you?"

I had just arrived at a camp experience for young adults who had graduated from high school within the past year or two.  I was delighted to reconnect with my old camp friend, Karen, who I never saw at all during the rest of the year.  She had a guy with her, a new guy, who was very tall, kind of cute, and had red hair that was not quite the same shade as Karen's.  I presumed he was her boyfriend, but soon she wandered off to connect with someone else, leaving the two of us together.  Turned out he wasn't her boyfriend, just a guy from her church.  At that point he was no longer kind of cute, but actually downright cute.  We were just getting acquainted when the call came out:  The all-camp volleyball game was about to start!

There was nothing that could have held less appeal for me.  But the red-head, it seemed, had been a basketball player, and couldn't keep away from something that involved a net and a ball. And he was getting cuter by the minute. So off we went, one to the green team and the other to the white team.

The guy must have thought me to be cute, too, because he intentionally kept serving the darned ball right at me.  I thought it would never end.

I no longer remember which team won.  And I've never played volleyball again.

But I married the guy.  And he's still pretty cute.

Anonymous said…
Awwwwww! And just for fun, the iPad changed that to "Assess". I think no need for that at this point!

AnnieO said…
Adorable! My grandpa had red hair and my sister does too :) I believe I last played volleyball at a family reunion some years ago!
Saturday, May 14, 2011 6:52:00 PM

I'm glad this story came around again due to that double click because I missed it the first time.